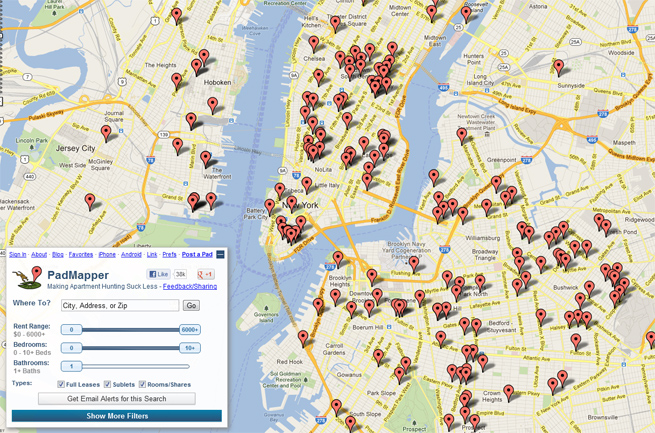 Granddaddy-of-classifieds-sites Craigslist has sued smart apartment-hunting app PadMapper for continuing to use its listings after Craigslist issued a cease-and-desist letter.

PadMapper scrapes data from various apartment listing sites including Craigslist, Apartments.com, and Rent.com, and places those listings in Google Maps. It’s an ingenious app for apartment hunters who want to specifically compare listings and prices by neighborhood.

The drama between the two started back in June when Craigslist blocked PadMapper from using its API to list apartments. PadMapper complied and even opened its own sister service called PadLister to help fill the gap. But after finding a “legally kosher” way to use Craigslist’s listings again, PadMapper is back and running with listings from Craiglist included.

While PadMapper’s “legally kosher” way uses a third party to get its listings instead of using Craigslist’s data directly, Craigslist says this isn’t good enough. Craigslist claims that it has done all the hard work on the classifieds side and that PadMapper is piggybacking on that hard work. Craiglist says that PadMapper and third-party data service 3Taps are “unlawfully and unabashedly mass-harvesting and redistributing postings entrusted by craigslist users to their local craigslist sites.”

However, the problem with Craigslist is that its design and interface for apartment listings is clunky, ugly, and outdated. The company has not indicated that it wants to change, and it simply takes a lot of time for apartment hunters to use. PadMapper makes it much easier to look at listings by location, and it links back to the original listings, so Craigslist still gets traffic from it.

Check out the legal filing below: