It’s becoming increasingly apparent that monthly subscription services are on the rise, as evident with the relative success of The Fancy (Fancy Box), Bark Box, Dollar Shave Club, LootCrate, and many others.

Austin, Texas-based startup Cratejoy wants to bring the same kind of monthly subscription business model to all businesses with its “Subscription as a Service” platform, launching today. Additionally, the startup announced that it closed a fresh $4 million series A round of funding led by Charles River Ventures, which previously invested in Twitter and Zendesk, among others.

Cratejoy gives pre-existing businesses — or really any business with an existing audience or loyal clientele — a way to launch a monthly subscription service that makes sense for their individual companies. Cratejoy handles all the financial transaction activity, gives you tools to track and manage inventory, prints shipping labels, a custom-designed splash page, and offers a set of analytics to see how people are responding to those shipments month-to-month.

“We expected a certain amount of use cases for Cratejoy, where someone wants to offer a monthly subscription as part of their Shopify store or businesses that want to get into the subscription box craze,” Cratejoy cofounder and CEO Amir Elaguizy told VentureBeat. “But we’ve been most surprised by interest from publishers and groups that cater to a niche audience. 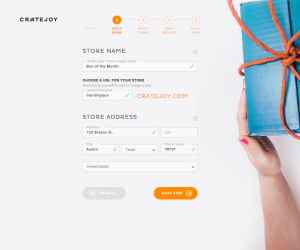 Above: A screenshot of the setup process for creating a subscription service on Cratejoy.

“There are these businesses that cater to crazy niche crowd, like we have one guy who focuses on house rabbits and offers a subscription of pet rabbit supplies products every month. Then there’s another called The Fox Society that offers a date-planning service for married couples… which sends you a post card in the mail with a list of [prearranged] activities and instructions for a certain night,” he added. Other businesses using Cratejoy’s platform include high-end men’s tie company Root Bizzle and baby clothing shop A Little Bundle.

Another example — and one I find probably most interesting — is the publisher subscription model. News organizations typically have a community of loyal readers, usually surrounding a specific subject. A percentage of those loyal readers might be willing to sign up for a subscription service that offers a combination of digital and physical gifts shipped out on a monthly basis. This is essentially what advertising is suppose to do (sell readers products that match the editorial content), but lately that’s not been very successful at funding the daily operations of a news publication. Point being, Cratejoy has the potential to open up a new stream of revenue for the publishing world.

“A subscription customer is worth 10 times more than a regular customer, because those are the people loyal to that business [who] are most likely to spend more money,” Elaguizy explained. He added that another big benefit for smaller businesses is being able to get a better grip on inventory control. “Inventory is such a problem, because businesses order too much and then can’t sell. There are entire industries that have sprung up around this problem,” he said, pointing to Amazon’s clearance store and the Amazon-owned Woot as two examples.

The company, which previously launched its service in beta, already has 200 businesses using its subscription service platform. Elaguizy said that prior to launch, about a third of those companies were generating revenue for Cratejoy, which charges a minimum of 1.25 percent on every transaction. There is a fee that Cratejoy clients can pay up front each month to lock in the low 1.25 percent cut on every transaction, too.

Elaguizy told me that plenty of larger corporations have independently reached out to Cratejoy about using the service, in part because of the smaller businesses with similar products that have seen success with a subscription-based model. (Last week, I vaguely recall Gillette running commercials for its own razor subscription service to push back against Dollar Shave Club.)

“What we’re interested in is the people who turned their hobby into a business being run out of their garage. That’s who we built Cratejoy for,” he said, adding that the service has over 3,500* other companies on a waiting list to start using the platform.

Founded in 2014, Cratejoy has raised $6.2 million in funding to date from CRV, SV Angel, Y Combinator, Capital Factory, Andreessen Horowitz, and others. The company said it plans to use the funding to increase the number of clients using its platform and to seek out new opportunities.