In the often silly world of third-party Facebook applications, Friends For Sale is especially silly — and smart.

It’s a game where you and your Facebook friends compete to buy and sell each other as “pets,” with each person receiving a market-based virtual valuation.

The San Francisco-based company says it is not for sale, even though other social game developers have recently been acquired by market leaders Zynga and SGN.

The company has just raised $4 million from Lightspeed Venture Partners.

Here’s how it works. You join Friends For Sale and receive a starter war chest of several thousand dollars of the company’s virtual currency, as well as a valuation of how much you’re worth. Then you see a list of all your Facebook friends who have added the application, along with their selling price, and you can start buying them up. Price is determined like in any market, by bidders — so if you’re competing against others to buy a particular friend, you’ll have to keep raising your bid in order to maintain ownership.

When you sell a friend, you get to keep half the profit. The other half goes to the person getting bought. You can also make money by doing things like inviting more friends to the application. You earn $2,000 for every four hours that you’re logged in, and $1,000 for every friend you invite. And when somebody buys you, your value increases.

What’s the point of owning a friend, besides making virtual money on their eventual sale? Well, you can buy them gifts, or you can use them to “poke” other friends.

So really, this game is a mask for deeper social intentions. Let’s say you’re a high school student and you want to show a classmate that you have a romantic interest them — buy them and give them a gift on Friends For Sale. Or lets say you want to attract the interest of a prominent entrepreneur and angel investor like early Googler Georges Harik. Buy him, if you can afford it: He’s my most expensive Facebook friend, worth more than half a million dollars in the app’s virtual currency (pictured, above; thankfully, he’s already an investor in VentureBeat).

Since I’m new to the game, I’m virtually poor, and I’ve had to settle for buying undervalued friends on the cheap — specifically fellow blogger Nick Gonzalez. Who knows, maybe this application will turn out to be a good recruiting tool for VentureBeat? 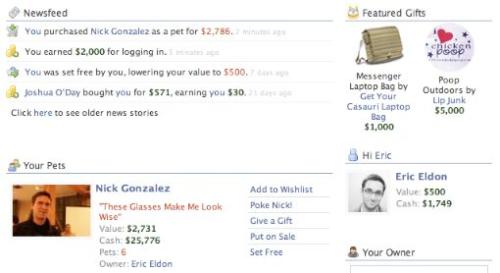 At a high level, this game isn’t just like Scrabulous or one of the many other “social games” on Facebook, that rely on porting in an existing idea onto the site. The game itself is valuing the sorts of social interactions that you might want to be taking anyway.

And it’s one of the more popular apps on Facebook. It started last November and has grown to more than 600,000 regular users, among the seven million Facebook users who have installed it.

There are still some conceptual kinks that the game is working out. If one of your “pets” uninstalls the application, you lose your money on them. There have also been a rash of fake profiles, presumably by users buying their own fake profiles then reselling them at higher prices — virtual market collusion? And, since there are a range of privacy settings, like making your pets private, the market is also not fully transparent for anyone with the virtual cash to participate in.

Friends For Sale is the second try of a team of developers that does business under the name, and I’m not making this name up, “Serious Business.” The team previously tried to port another social game onto Facebook, but it didn’t grow virally because it didn’t integrate into people’s existing “social graphs” in the same way that Friends For Sale does.

The company is using the money to scale up its operations on Facebook and it is also planning to expand to other social networks that offer developer platforms.

Long-term, it says its not aiming to make money through advertising, but through other forms of monetization it won’t tell me about. I’m guessing virtual goods will somehow be involved.

Question is, when can I start buying minority equity stakes in my Facebook friends.