And he’s just raised $15 million more to make it happen.

Modern customer relationship management is essential to tracking and managing a company’s revenue. The problem is that it relies on manually inputting endless reams of data, and salespeople tend to hate the digital equivalent of paperwork. 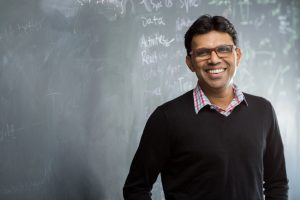 Ganapathi thinks he knows how to remove the friction.

“The challenge for all CRM systems … are the low usage rates amongst its users,” he told me via email. “Tact works to change that, sitting on top of your CRM, by turning a salesperson’s connected device into an AI-powered smart assistant that automates administrative tasks and creates a frictionless selling experience.”

Tact integrates with Salesforce, LinkedIn, email, calendars, address books, maps, phone apps and more. Then it allows salespeople to command and control those apps via voice, messaging, and touch. The goal is to make it easy to keep both salespeople and the CFO happy by ensuring all data is accurate, up-to-date, and, above all, easy to enter.

There’s a fundamental change happening now in human-computer interaction, Ganapathi says. Mobile’s part of that, as are messaging, bots, and the rise of voice-native systems. 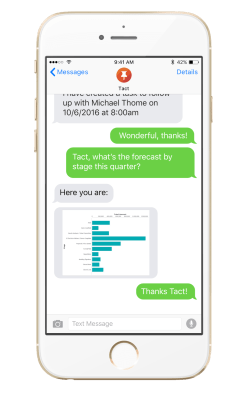 “We’re focused on bringing this kind of thinking to the enterprise, specifically the lives of salespeople,” he told me. “What every salesperson I’ve spoken to wants most is the support of an administrative assistant. We built Tact to be right there, anytime you need it. No matter what you’re doing — making a sales call or driving to your next meeting — and where you are, online or offline.”

Tact is an app on the major device platforms, but users can also interact with it via messaging platforms. The company has an Alexa skill if people want to enter data into Salesforce in their living rooms, and a Google Action is not far behind, now that Google has released an API to its Assistant platform.

“Our platform connects to and synchronizes data on behalf of the user from multiple backend systems,” Ganapathi says. “We use AI to connect the dots across this corpus of data to make it useful to the user. We then layer in various services that are purpose-built to help a salesperson with specific tasks.”

The result is a post-web architecture, something that Tact says Google, Amazon, Apple and Microsoft are all working on.

Tact will use the new $15 million funding round to accelerate momentum, the company says, citing deals with GE and other major corporations. More engineering and sales staff are also in the plans.

Upfront Ventures led the series B funding round, and its managing partner Mark Suster will be joining the Tact board. Microsoft Ventures also participated, as did existing investors Kevin Efrusy of Accel Partners and Satish Dharmaraj of Redpoint Ventures.