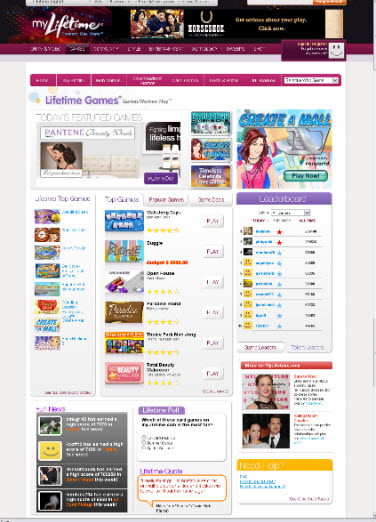 Women’s TV network Lifetime is teaming up with King.com, which will become the exclusive provider of skill-based games on Lifetime’s online site, myLifetime.com, VentureBeat has learned.

The deal is another sign of the convergence of media companies with games. The recession and changing consumer habits have taken a toll on traditional entertainment business models. Everyone from music labels to TV networks is diving into games as a haven. A couple of weeks ago, casual game site Big Fish Games said it would provide original games to Time Warner’s People.com web site.

The match between King.com and Lifetime Digital is a good one because the majority of King.com’s 17.5 million monthly unique visitors are women. Right now, about 3.6 million women visit Lifetime’s online properties, which include myLifetime.com, DressUpChallenge.com, LMN.tv, LifetimeMoms.com and MothersClick.com.

“This deal helps the TV networks do a better job of retaining the audience as it shifts online,” said Robert Norton, managing direct of King.com North America.

The deal will also bring a lot of attention to King.com’s games. That’s important because its chief rival, Worldwinner, also has an alliance with a TV show network, GSN, a big cable network built around TV game shows.

Lifetime Networks, which is owned by Disney and Hearst Corp., already has hundreds of downloadable and online games for women. Real Networks provides the downloadable games on an exclusive basis. Lifetime Digital ranks among the top 25 online casual game destinations already. One of Lifetime’s game properties is Roiworld.com, a fashion site that combines social networking and games.

But partnering with King.com is a step up. London-based King.com was founded in 2004 and now serves more than 400 million games a month. It is a provider of skill-based games, where players can play in tournaments for prizes or money. It’s not gambling, however, because the games are not defined as games of chance. King.com has more than 150 different skill and social games.

King.com’s game portals include King.com and MyGame.com. King.com’s games are also available on sites such as Yahoo, MSN, AOL, Real Networks and a number of other media sites. Some of its big titles include TV-show-based games such as Who Wants to Be a Millionaire and The Biggest Loser.