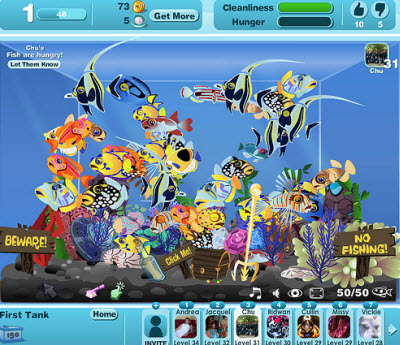 Crowdstar came out of nowhere last fall to become one of the biggest game publishers on Facebook. Now it plans on holding onto that position with a rapid expansion.

Jeff Tseng, co-founder of the Burlingame, Calif.-based startup, said in an interview at the company’s cramped offices that it will likely expand from 40 employees now to more than 100 by the end of the year. We’re taking notice because everyone is watching Crowdstar now, and because Tseng will make his first public speaking appearance on Wednesday at our GamesBeat@GDC conference in San Francisco at the Game Developers Conference.

The company’s headquarters looks more like a computer science classroom in a community college, or maybe a fish bowl crowded with fish. But this is the no frills Internet startup, where the only thing that matters is speed. Crowdstar will finance its expansion with profits from its social games, which include Facebook’s Happy Aquarium. Within a six month period, Crowdstar shot to the No. 3 game publisher on Facebook, behind only Zynga and RockYou, and it now has more than 50.8 million monthly active users, according to AppData. 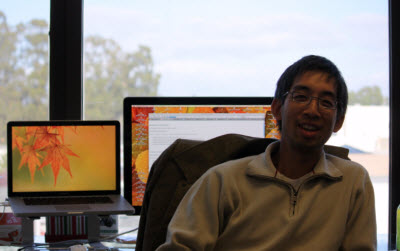 Just a couple of months ago, the company had 20 people. Still, Tseng (right) says the company is aiming to keep its freewheeling culture, keep the company profitable, and scale its size to match its potential. Zynga, the company’s chief rival, is far bigger with more than 800 people, 240 million monthly active users, and a $3 billion valuation.

Crowdstar was founded by Suren Markosian in the summer of 2008 with funding from YouWeb, the incubator run by entrepreneur and angel investor Peter Relan, who serves as chairman. Markosian was a Web 2.0 guy, an Armenian immigrant who went to school in Austria and now wanted to cash in on the newly open app market on Facebook. Tseng joined them a couple of months later; he is essentially a co-founder, but without a formal title. 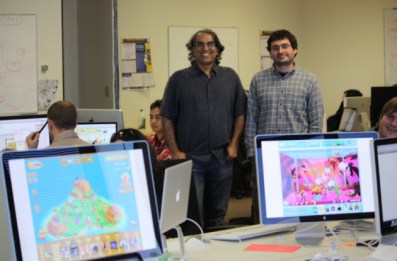 For a while, the company’s games were duds. Around them, rivals such as Zynga, SGN, RockYou, Slide, Playfish and Serious Business started to generate lots of users and real revenue growth. But each Crowdstar game was a kind of experiment that tested what was possible on the growing Facebook platform. (right: Relan and Markosian).

Some of the games tested virality and some tested monetization. They also tested how to write code that could scale to millions of users. Many of the games focused on user-generated content. But nothing really stuck. Still, the company used the early start to learn valuable lessons about how to operate as a social gaming company, Relan said. That meant that the company operated its games as a service, launching them fast and updating them continuously in response to feedback. 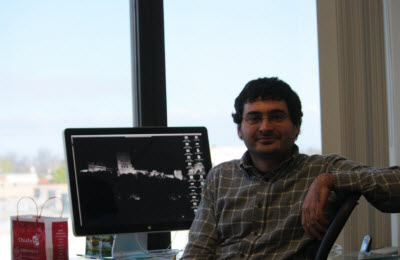 That was a big difference for Tseng, a former console game maker whose prior companies such as Sega and Secret Level spent millions of dollars over a couple of years developing games. Markosian and Tseng hired a bunch of talented and driven programmers and artists. They instilled a relentless discipline in the team, but they weren’t big on hierarchy or organization. The key ability in each person is agility, Relan said. Very few console game makers have grown up with this mentality, and too many think they know exactly what gamers want. That’s why the company has hired very few console game veterans.

“I was frustrated in consoles,” Tseng said. “Everything you thought you knew about users was theoretical. You only had one chance every couple of years to try out your theory.”

No one has titles in the company. There are no directors or producers or studio chiefs. A core group of 10 or so people makes the games, and operating teams of other people maintain the games that have already been launched. To give people titles would lock them into a mindset, Relan said.

With the new hires, the company plans to be able to make 10 games a year. Right now, everyone is crammed into a couple of rooms. Upstairs is Aurora Feint, another YouWeb-funded company. (Relan has also funded Sibblingz, one of the finalists in our Who’s Got Game startup contest at GamesBeat@GDC).

The drive, the organization and frequent experiments resulted in great luck, Tseng said. In September, the company launched Happy Aquarium, a fish bowl game that is part of a genre that has been very popular on Facebook and social networks.

Crowdstar had done a fish game before called Save the Reef. But this one took off like a rocket, hitting 27 million monthly active users by October. The company used that hit as a springboard to cross promote other follow-up games, Happy Island and Happy Pets. Now the company is just starting to test its next game, Zoo Paradise. If the company’s trivia titles are added to the mix, Crowdstar has more than 70 million monthly active users. Happy Aquarium is now available on mobile networks in Japan, and it will spread further.

All of this success has happened so fast. Happy Aquarium is built on the free-to-play model, where the game is free and users pay for things like decorations and fish food. This virtual goods business model is expected to grow from $1 billion in revenues in 2009 to $1.6 billion in 2010, according to Inside Network.

In this fledgling Facebook environment, anything can happen. Facebook periodically changes its platform and that has forced Slide and RockYou in particular to switch their tactics. Crowdstar shot to the high ranks in the fall, but someone like 6 waves could up with just one big game.

That’s why the company is in a rush. It plans to churn out games every six weeks or so.

“This is the most dynamic, fast-moving industry that I have ever seen,” Relan said. “I’ve been here in Silicon Valley for more than 20 years.”

Crowdstar now has plenty of options for growth. Big companies have been circling it, making offers to buy it. Business Week reported that Microsoft was among the bidders who wanted to pay more than $100 million for the company. Relan declines to comment. But he says the company has never taken outside money, doesn’t need to raise a round, and is focused on its David and Goliath battle with Zynga.

It may sound like this company is overhyped. But everyone is noticing Crowdstar now for a good reason. There are very few companies that know how to create outstanding social games today that generate a lot of revenue on Facebook. Crowdstar is one of them.