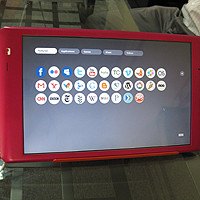 The touchscreen tablet PC that TechCrunch founder Mike Arrington decided to build himself will be available in November, according to an article in Singapore newspaper The Straits Times. Arrington launched the project a year ago, on his sense that the public demand for a $200 tablet PC was so strong, yet so overlooked by the tech industry, that there was a huge business opportunity for a product that could be launched with relatively low capital. To build the device, Arrington teamed up with Singapore startup Fusion Garage, whose homepage features the slogan, “What if the browser could boot without the OS? How different would the world be?”

Here’s the Straits’ description of the CrunchPad, of which reporter Tan Weizhen was allowed to see a prototype.

The fully working model, called a Crunchpad, has a 12-inch screen and weighs 1.2kg.

It allows users to watch YouTube videos, listen to music and edit documents, among other things.

Its operating system, or OS, was also developed in-house. The device will not have storage space — which some analysts have pegged as a big drawback — and will instead run programs hosted on servers: so-called cloud computing.

The CrunchPad also has a 3G wireless connection for network access.

Price for the device has crept continually upward, from $200 at its inception to $300 a few weeks ago, to $400 according to the Straits Times.

Also, the CrunchPad now faces competition, if Valley gossip can be believed, from Apple. The Apple rumor network says it’ll be in stores in September and will resemble “an oversize iPod Touch.” Price is uncertain, but Apple CEO Steve Jobs has been quoted as saying there’s no way to build a computer for below $500 that’s “not a piece of junk.” (BusinessInsider claims the price will be $600-700, and will be less dependent on a constant Internet connection than the CrunchPad.)

At this point, the CrunchPad is the device that seems a sure thing to arrive. But without a major brand name behind it, it’ll be a lot harder to sell than whatever Apple produces. And it’s unlikely that Arrington’s CrunchPad startup will be able to afford the massive ad campaign Apple would devote to its hypothetical tablet. Arrington’s brazen little project will have only one clear advantage: Techies love an underdog. He’s going to get lots of free marketing.

[Photo from The Straits Times]