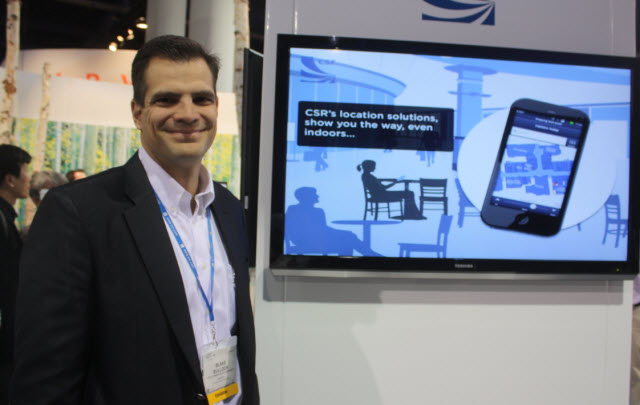 CSR, the leading maker of navigation chips, showed how you can use its upcoming platform to find your way inside large buildings such as the giant Las Vegas Convention Center. Now a combination of several new technologies makes it possible to navigate with map-based directions inside large buildings, giving you even fewer reasons to get lost or be late for an appointment. 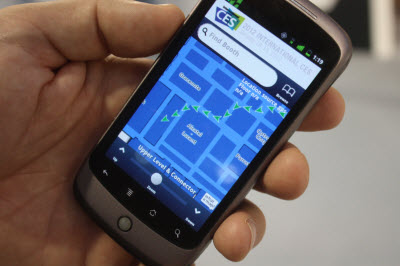 At the Consumer Electronics Show last week, CSR showed a demo of its SiRFstarV global positioning system (GPS) chip, which is coming out later this year. The preproduction chip showed how you could use a map of the convention floor from Micello, Navteq and VisioGlobe to navigate across the floor of the giant hall.

J. Blake Bullock, senior product line manager at CSR, said in an interview that SiRFstarV fuses various radio signals, sensor inputs, and other location data to provide reliable and accurate positioning inside buildings. Using a cloud-based back-end service dubbed SiRFusion, the technology pulls together the various inputs to figure out where you are and where you are moving.

“We’ve been working on this problem for the last couple of years,” Bullock said. “The result is good positioning indoors.”

The smart thing about this is that none of the signals by themselves is perfect. GPS uses satellites that need a line-of-site to the handheld device. WiFi radios are also useful for triangulation. Your phone can detect a variety of WiFi networks, and it can calculate which hot spot you are nearest. So that can also help fix your position. But WiFi networks aren’t ubiquitous and sometimes you’re out of range. The system also relies on gyroscopes, compasses, and accelerometers — which detect motion — to determine the speed and direction you are moving. That method is called “MEMS positioning dead reckoning,” and it determines your step patterns. Separately, each system has flaws. But together, they can fix your position with reasonable accuracy.

Bullock showed me how he could use an application with a Micello map that showed the walking route from the CSR booth to the Nokia booth. The device came up with a reasonably accurate turn-by-turn path through the network of booths to show me where I was supposed to walk. It tells you, for instance, to walk to the BlackBerry booth and then turn right. 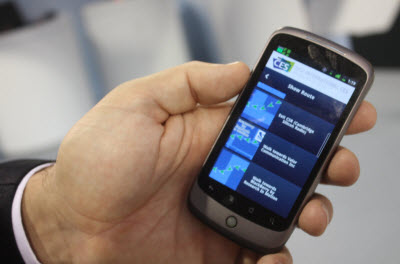 Nearby, there were 255 WiFi access points that could be used to triangulate our position with pinpoint accuracy. CSR’s technology can use a barometer in the chip to determine your elevation, so it can tell which floor you’re on. If you walk down the stairs, the sensors will tell the device that you have gone down one level.

Now what has to happen is that companies need to create indoor maps. Google said in November that it will add indoor information to Google Maps, using a crowdsourced model. Navteq has indoor navigation and routing, but Google doesn’t have that yet. Once those things are in place, CSR’s technology could be great for airports, train stations, shopping malls, convention centers, and casinos. The map and application companies are working on creating accurate indoor maps, based on building blueprints.

The SiRFstarV family of chips will go into production later this year, and devices using it could debut sometime in 2012. CSR is a big chip maker that has grown bigger with the mergers of Sirf and Zoran.

Bullock showed me how he could use an app to search for a booth at CES in the South Hall of the convention center — a cavernous place. The map showed all of the major booths inside the hall and green arrows (see picture) pointed out which way to walk. You could judge your progress by looking at major booths along the way on the map trail.

Now there is no escape, and no excuse for getting lost. Unless you lose your phone.