Even though I try to approach every startup with an open mind, there are few companies more likely to provoke knee-jerk skepticism than those claiming to compete head-to-head with Google in Web search. But a new company called Cuil looks like it could actually give Google some real competition.

For one thing, the executives behind Menlo Park, Calif.-based Cuil (pronounced “cool,” and previously spelled “Cuill”) should have a good idea of what’s needed to take on the search giant. Cofounders Anna Patterson and Russell Power both helped create Google’s large search index TeraGoogle, while the third cofounder, Tom Costello, (who is also the company’s chief executive and Patterson’s husband) worked on the WebFountain analytics engine at IBM and as a researcher at Stanford. Their vice president of products, Louis Monier, has worked at Google and eBay, and is best known for designing pioneering search engine AltaVista.

Until now, Cuil has been getting attention for the pedigree of its team and for raising $33 million from Madrone Capital Partners, Tugboat Ventures and Greylock Partners. The company has been secretive about its product, but Patterson recently gave me a sneak peek of the Cuil search engine, which is launching tonight. 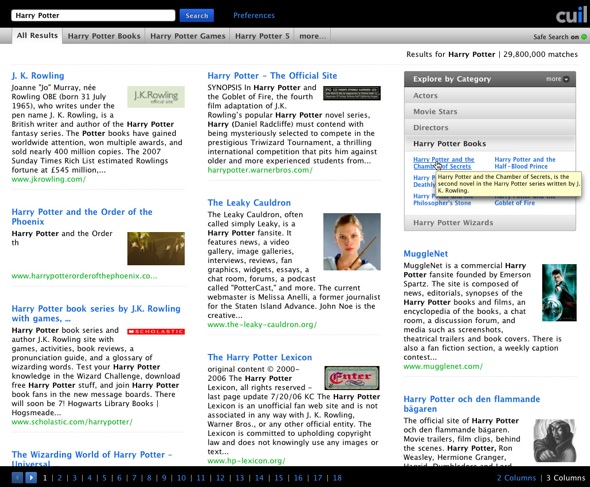 The biggest difference between Cuil and competitors like Google is the size of its index. At launch, Cuil’s index includes 120 billion Web pages, making it three times the size of Google’s, Patterson says. (This may be a bit confusing, since Google just announced that it has found 1 trillion unique URLs on the Web. The distinction is that Google doesn’t include all those pages in its index.) Bigger is better, and not just for the obvious reason that Cuil can return more results for most searches. That larger index also provides Cuil with more data to determine which results are most relevant. Patterson says Cuil can index more pages for a fraction of the normal cost because each query is directed to a specialized, subject-specific machine and doesn’t require a search of the full index.

Cuil has some other cool features. Its ranking is based less on popularity (which is commonly measured by links, although Microsoft researchers just presented a paper on BrowseRank, a new ranking method based on the number and duration of user visits), and more on content. For example, Cuil would understand that someone performing a search for “baby,” “aspirin” and “fever” is probably looking for medical advice, and results with related medical terms would be ranked higher than a gossip page about Britney Spears’ baby. Cuil also uses a tab-style layout to make it easier to break down your search into related searches and smaller subjects.

A smart approach. But with Google’s market dominance, will anyone use it? Well, Cuil probably won’t become your top choice for a Web search right away, but Patterson notes that many users have backup search engines that they visit when Google’s results are unsatisfactory. People may give Cuil a chance as their Google backup, and if the results are consistently better, usage will rise. As with other search companies, Cuil’s business model is based primarily on advertising, although it’s launching without ads.

Cuil didn’t make a demo version available to me, so I haven’t had a chance to really kick the tires. I’m certainly looking forward to giving it a try over the next few days. If you give Cuil a shot, let me know what you think in the comments.