The online gaming community has ballooned over the past two years, as have the business opportunities around them. Game sites offer support, virtual currency exchange, and never-ending performance data. They’re looking more like stock investment sites than game sites.

Curse is an example of what may be the future for gaming support sites, offering both community and information features. The site reports strong growth, and is considering offers for a funding round at least twice the size of the $5 million it took earlier this year (our coverage) after moving to California.

As virtual worlds grow, they increasingly generate a constellation of satellite services, of which Curse and other sites like Rupture (our coverage) and GuildCafe are the first. The core business of these new startups is informing and assisting gamers in their alternate lives, not simply connecting them with each other.

Hubert Thieblot was only 19 years old, and still based in his home country of France, when he opened the precursor of Curse. Although it was only a forum with downloadable data (like software updates) for World of Warcraft players, gamers eager for information began to flood the site. His brother saw an opportunity and helped start placing ads.

The core of the fledgling site quickly became the download section, offering add-ons, updates and information for games like WoW. News, blogs, forums, a wiki and profiles for social networking — all have since sprung from that initial central offering. 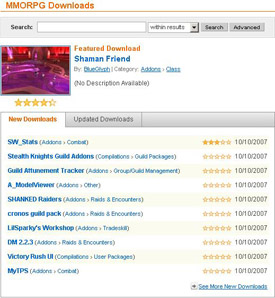 Today, two years later, Curse receives an average of four million unique visitors each month, who rack up a collective 100 million pageviews, according to the company. Although the majority of traffic to Curse, some 70 percent, still comes from its download section, that percentage may drop over time as the site’s other sections grow.

The business opportunity for sites like Curse comes specifically from massively multi-player online games like WoW, Thieblot says. A game like Second Life is too intuitive and contains too few competitive features for users to need a resource that helps them play, or in gamer lingo, reach the “next level”.

As other free and ad-supported gaming sites like Metaplace (our coverage) grow, however, they may also reach the level of complexity that only MMORPGs now have.

Similarly, the participation of the community will, like Wikipedia, help grow the amount of user-submitted information about specific aspects of games. Gamers naturally gravitate to the games they love most, which in turn helps the site focus its energies. “It’s the community’s decision as to whether a game sucks. We can then give priority to the best games,” says Thiebot.

Reaching publishers is the next step for Curse, developing relationships to help launch fully fleshed portals for specific games the day they reach the mass market. Game publishers can also benefit, from revenue-sharing agreements for content created around their copyrights.

As a large part of Curse’s business is simply arranging and presenting content submitted by players and publishers, the site could logically have higher margins than older portals like IGN that have in-house staff who develop much of their content.

No single site will corner the market, no matter how many users it draws. Thieblot told us many opportunities still remain for database-oriented gaming sites. “People want a massive amount of information about their games, just like real life,” he said. 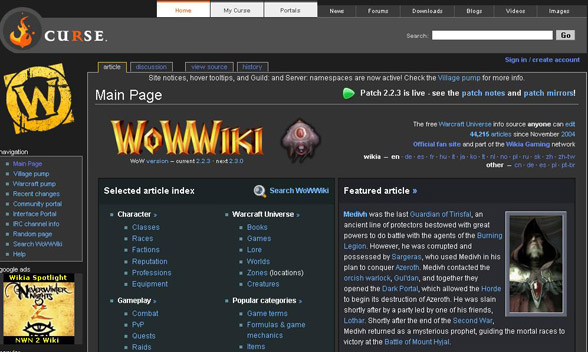