Cyanogen CEO and cofounder Kirt McMaster today used Twitter for iPhone to clarify that his company is not pivoting towards apps and that it will remain an OS company. Cyanogen develops CyanogenMod, an open source operating system based on the Android mobile platform.

McMaster’s tweets come in response to rumors on Friday about major changes at the company. Android Police was the first to report news of layoffs, noting as well that “the company plans to undergo some sort of major strategic shift, with one claiming that this involves a ‘pivot’ to ‘apps’.” Recode then “confirmed” this apparent strategic shift, adding that it was being led by Cyanogen’s new COO, Lior Tal.

Today, McMaster decided to set the record straight as best he could:

Cyanogen NOT pivoting to apps. We are an OS company and our mission of creating an OPEN ANDROID stands. FALSE reporting was outstanding.

It’s worth noting that Cyanogen didn’t simply deny the reports outright on Friday. That’s because the part about layoffs was apparently correct. McMaster confirmed as much on Saturday, also via Twitter:

really sad we had to let go of some wonderful folks this week. startups and disruption are brutal.

He naturally didn’t share an exact number of how many employees were affected. Android Police’s report originally stated that “30 out of the 136 people Cyanogen Inc. employs — around 20% of the workforce — have been let go.”

But the most bizarre part is that McMaster chose to send the news out today using his iPhone: 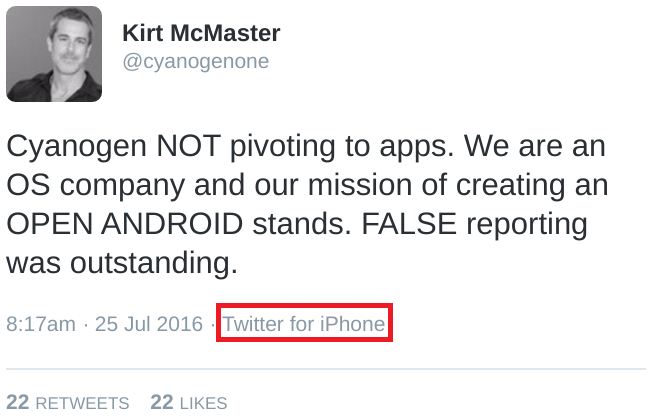 That’s hardly the end of the world, but you would think the CEO of a company trying to clarify his company’s mission after layoffs, specifically saying that it is an OS company, would actually use that OS to send out the clarification.

At the very least, someone at Cyanogen should go out and buy McMaster an Android phone.