Cybersecurity risk-monitoring platform SecurityScorecard has raised $50 million in a series D round of funding led by Riverwood Capital, with participation from Intel Capital, Evolution Equity, Two Sigma Ventures, Axa Ventures, and Accomplice, among others.

The company didn’t confirm whether previous investors — including Alphabet’s GV and Sequoia Capital — participated in this round.

Founded out of New York in 2013, SecurityScorecard helps organizations monitor risks around their cloud-based security by identifying possible vulnerabilities from a hacker’s perspective, covering areas such as network, endpoints, DNS health, and IP reputation. Additionally, the platform analyzes the third-party vendors that companies work with to find weaknesses that could compromise SecurityScorecard’s clients’ own security.

Armed with all this data, SecurityScorecard assigns a rating to help security officials inside a company address the most urgent vulnerabilities and evaluate their partnerships — the platform shows a record of specific issues that have impacted scores over time. 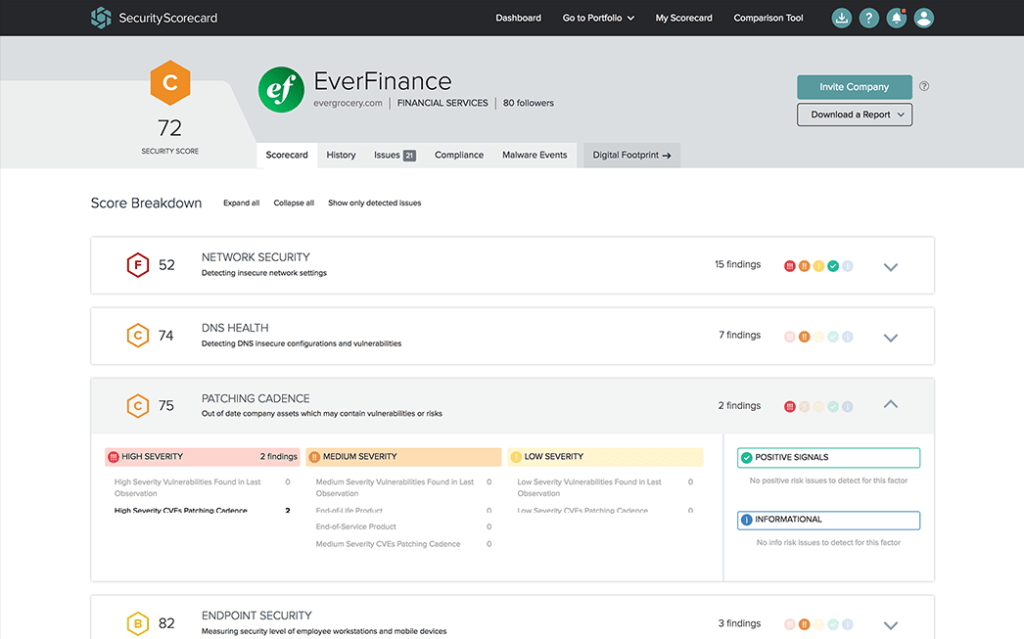 SecurityScorecard had previously raised around $62 million, including series B and C rounds in 2016 and 2017 (which GV invested in). With another $50 million in the bank, it is setting out to accelerate its global expansion and meet the “spiking demand” for its security rating platform.

“SecurityScorecard is the only security rating vendor that provides complete transparency and visibility into the ratings methodology and performance of its award-winning platform,” said company CEO Aleksandr Yampolskiy. “Incorporating trust and transparency into the SecurityScorecard platform is a necessary requirement to be an industry standard for measuring security risk across all industries.”

The global cybersecurity market is expected to grow from $152 billion in 2018 to $250 billion by 2023, and the security risk-rating facet specifically has drawn some notable investments over the past year alone. Cambridge, Massachusetts-based BitSight raised $60 million, taking its total funding to $150 million, while Salt Lake City-based RiskRecon secured $25 million in a round led by Accel.

SecurityScorecard claims its valuation doubled at its latest funding round and that last year its revenue also doubled for the fourth consecutive year — though it declined to provide any figures for either metric.