The daily fantasy sports market rose dramatically in the past few years with the rise of DraftKings and FanDuel. But in 2015, regulators closed in, with some declaring the betting on sports outcomes amounted to illegal gambling, rather than legal skill-based wagering as the companies alleged.

A total of 29 states are considering legislation related to daily fantasy sports, according to a report by market analyst firm Eilers & Krejcik Gaming. That has put a cloud on a sector that had the ambitious goal of marrying social media, sports enthusiasm, and fantasy betting.

“Uncertainty is the word: The trajectory for 2015 viewed from 2014 was clear — growth ahead, with the only question being how much and how fast,” Krejcik wrote in the report.”But viewing the year ahead today, it is easy to imagine a number of wildly divergent trajectories for daily fantasy sports based on political, legal, economic, business model, consumer, and market pressures.”

The fundraising environment is cloudy, too. Back in August 2015, DraftKings reportedly raised $200 million at a $2 billion valuation.

“That environment is understood to now be significantly — arguably brutally — more challenging, and both DraftKings and FanDuel have likely lost their unicorn status [startups valued at over $1 billion],” Krejcik said.

The daily fantasy sports market grew quickly thanks to television ads that raised awareness dramatically in 2015. But that level of spending won’t occur in 2016 thanks to the pressure from regulators. And roughly 1 percent of the users at the major sites account for 60 percent of entry fees, which go into the companies’ pockets. As a result, DraftKings is reportedly raising money at a significantly lower valuation.

On the positive side, DraftKings formed a partnership with Major League Baseball, while FanDuel created one with the NBA. Yahoo moved into the market, as did Amaya through the acquisition of Victiv (rebranded as StarsDraft). The companies are diversifying through the addition of more sports, with less reliance on the NFL. A handful of attorneys general have come out with favorable legal rulings, and there hasn’t been a negative ruling yet in key states such as California and Florida.

In a statement to VentureBeat, FanDuel said, “FanDuel has consistently posted triple digit growth since inception and 2015 was our best year yet, reaching more than 6 million registered users. Last year, we called for our games to be regulated and millions of fans have stood up, asking their elected officials to act — and now it’s happening. During the opening sessions of state legislatures this year, lawmakers in nearly 30 states are working towards passing fantasy sports regulations that will protect consumers and allow our game to continue to grow. The future of fantasy sports will be decided in state legislatures; the progress is strong and the long-term future is bright.” 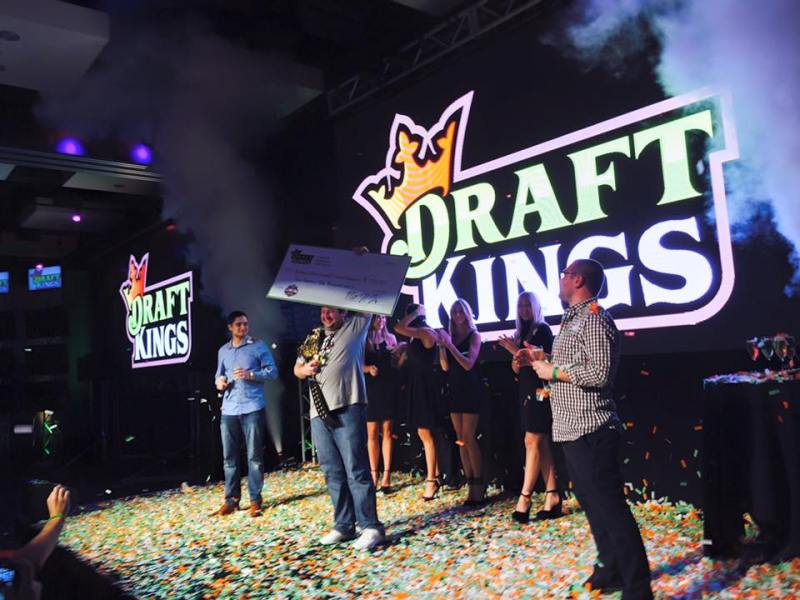 On the other hand, New York put its foot down by ruling that daily fantasy sports constituted illegal gambling, as it said there just wasn’t enough skill in the outcomes. All told, there have been nine negative opinions from state attorneys general. About 25 bills supporting daily fantasy sports have been introduced in state legislatures.

FanDuel raised an estimated $275 million in June 2015, and Krejcik believes it still has about $75 million to $100 million of that. DraftKings raised an estimated $500 million in 2015. Still, Eilers estimates that FanDuel lost $137 million before taxes in 2015, while DraftKings lost an estimated $280 million. The biggest expense is prizes for fans, while the second-biggest cost is sales and marketing. And roughly 70 percent of that cost was TV advertising. In other words, the companies have been playing an unprecedented user acquisition game on the assumption they could always raise more money.

“We don’t expect to see anywhere near this level of spend again from any DFS operators,” Krejcik said. “While this massive ad spend helped drive record first time depositors (FTDs), it also resulted in a uptick in
customer acquisition costs.”

“The DFS industry is at a crossroads,” Krejcik wrote. “This year will undoubtedly mark a year of change and transformation. We are witnessing a monumental shift from the status quo, at least from a legal standpoint, which will impact the underlying market dynamics and competitive landscape.”