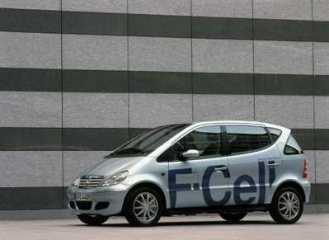 Daimler’s chief executive Dieter Zetsche said today that hydrogen-powered cars will be ready for the mass market by 2015. The key will be making them cost-competitive with other automotive technology on the road, followed closely by building the necessary infrastructure, he said.

Even if the concept is already proven on a small scale, average drivers will still need to be able to fill their tanks like they do now in order for hydrogen fuel cells to catch on. For this reason, Zetsche made his announcement to traditional energy and gas companies that might be interested in branching into this area. Taking an opposing tack, U.S. energy secretary Steven Chu has talked about cutting the research and development budget for hydrogen because the lack of realistic fueling stations will be prohibitive.

In the last eight years, the U.S. has spent about $1.5 billion on developing hydrogen fuel cells. Chu would like to shift these funds to other transportation alternatives, especially plug-in electric vehicles. But this might not delay hydrogen too much. Automotive giants like General Motors, Toyota, Ford and Honda have all said they will continue working on the technology without government support.

Daimler’s goal is to commercialize the hydrogen fuel cell version of its compact Mercedez Benz B class by 2015. It plans to unveil the model at an auto show in Frankfurt next week, and says it will be able to produce 200 of them this year. Two years ago, it was focused on the Mercedes Benz F-Cell (see image above), which it hoped to have widely available by 2010. Of course, this has yet to happen.

To make this possible, Daimler is seeking partnerships with other major car makers — particularly Toyota, which hasn’t been hit as hard by the economic slump. It is also looking for help to produce the next iteration of its Smart car.