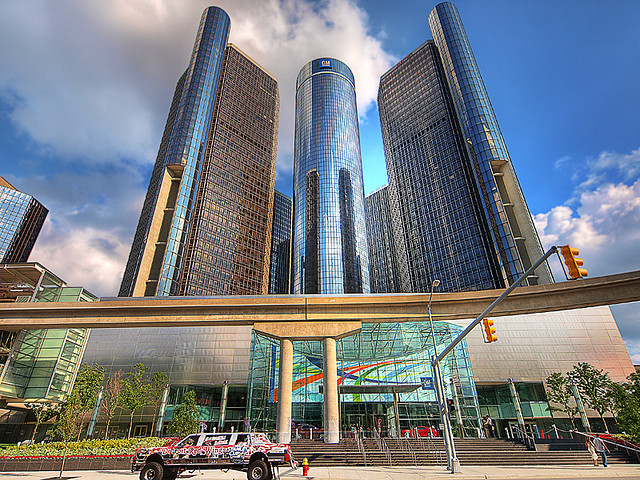 Disclosure: Quicken Loans invited me to come to Detroit after I wrote about the city. The company paid most of my expenses, including flight and hotel. My reporting, however, is my own.

In other words, Gilbert is not your average billionaire.

I went to Detroit to find out what’s happening — what’s changing, and what’s growing in Detroit. The answer, to a large degree, is Dan Gilbert. He’s the founder and chairman of Quicken Loans, the majority owner of the Cleveland Cavaliers, and a principal in Detroit Venture Partners, among about 50 other companies. 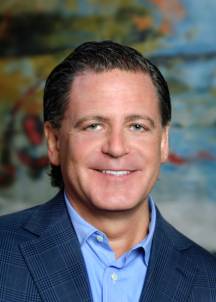 But perhaps his biggest passion is restoring Detroit to its former status as one of the premier cities in the United States.

In the pursuit of that mission, Gilbert has bought vacant, derelict buildings and is turning them into modern, vibrant, art-filled offices. He’s moved over 7,000 employees downtown, and he offers $20,000 incentives to employees who buy a home in the city. He’s started local accelerators and a venture capital firm, and he’s investing in local talent and local ideas. He’s galvanized a reverse migration of sorts, starting to refill the urban core of downtown Detroit.

And he doesn’t wear a tie.

Quicken Loans, Gilbert’s flagship company, invited me to Detroit after I wrote about the city and — full disclosure — paid my airfare and hotel. I spoke to Gilbert during a break in one of his employee orientation sessions, in an empty room we found just off a casino floor.

His passion is a resurgent downtown Detroit with a vibrant urban life, and he pours his — and much of his companies’ — resources into that mission. But he’s quick to add while he jokes about “skyscraper sales,” everything he does makes hard business sense.

I asked him about his life, his work, and his mission.

Gilbert: Yeah, born and raised. Grew up three-four years in the city, and then a couple miles in the suburbs.

VentureBeat: As I’m walking around at the Quicken head office, it doesn’t feel like a company … it feels like a mission.

Gilbert: Right … yeah … I would say we’re focused on that, at least as far it concerns Detroit. But we’re still pretty focused on our businesses, too … we think it goes hand in hand.

VentureBeat: One of the things I noticed in your offices is design: designed environments, art, color. Talk to me about that.

Gilbert: Well, we think that in the brain economy, innovation and creativity are key in developing ideas and creating jobs and wealth … and so we think that we can inspire that kind of thought process in an environment that’s not, well, like this. [He gestures around the generic beige hotel meeting room we’re in.]

VentureBeat: I’ve heard that you’re not a traditional CEO, and I’ve seen some of that here — why are you not button-down, tie, and such? 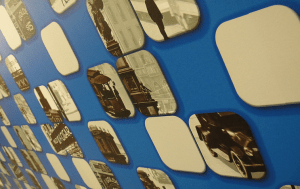 Above: The old and the new in the corporate hallways.

Gilbert: Well, I don’t think I grew up that way, first of all, and secondly, I just don’t think it works in today’s world.

I think that all that stuff really symbolizes separation between you and most of the people who work at the company.

I just think that everything is symbolic and who you are determines everything that you do, small moves and big moves. And plus, it’s just more comfortable — and more fun.

VentureBeat: In your company manual, you’ve got a list of 27 things you’ve learned in 27 years of professional life. What’s the most important one?

VentureBeat: You love sports — you’ve bought a lot of sports teams. Why have you gotten into the sports business?

Gilbert: Well, the Cavs became available to us about like seven years ago, sort of quickly and Cleveland was a close-by city and it was just sorta one of those things … it became available, and we were in a fortunate enough position to make the deal happen, and it was an exciting team.

And it led to other things in Ohio with the casinos and the other stuff we’re doing here. We’re sort of like a Lake Erie center … Detroit and Cleveland, the flower of the lake, and those are our two home cities, and that where 85 percent of our action is.

VentureBeat: As a Canadian, I noticed you have a hockey team, too.

VentureBeat: But you haven’t bought the Phoenix Coyotes?

Above: The cafeteria at Quicken Loans

VentureBeat: Detroit Venture Partners, which you own, is raising a round right now. What are you looking for?

Gilbert: Well, I think that Josh [Linkner, CEO of Detroit Venture Partners] is out looking to diversify the funding. But more so than capital, he’s looking for other partners who have connections to Silicon Valley or to others who have invested in technology for a period of time. It’s not so much the money as what are the strings with the money … what’s behind it.

We’re looking for technology-based startup business, or close to startup businesses. They don’t have to be Detroit-based, but a lot of them are in Detroit. There’s a lot of others — one in San Francisco that we funded, but they’re going to put their sales office here, and others that have moved in.

Some people are vewing this — you’ve probably gotten a feel for this — there’s sort of like this whiteboard atmosphere here. You can really have an impact and change in this city. There’s a lot of talent here — and coming.

Gilbert: Good question … oh, boy … probably not getting into subprime lending [with his Quicken Loans company]. 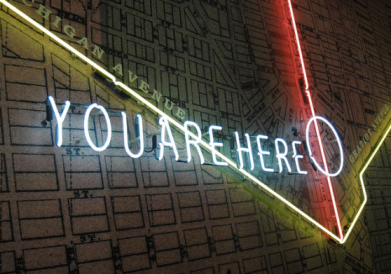 Above: Just in case you forget where you are: The sign in the lobby of M@dison, the home of Detroit Venture Partners.

Gilbert: Oh, yeah, by a significant, significant amount. It’s sort of one of those things we didn’t do, more so than what we did.

VentureBeat: Did you feel like you were missing out during that period, when it seemed like people were making millions of dollars almost daily?

Gilbert: Yeah. Our mortgage guys would give us pressure, because they would miss out on deals and ask us why we didn’t have these products … but we dabbled in a few of alternative products but we never went too far.

VentureBeat: And that saved the company?

Gilbert: Yeah, it would have killed us, for sure. Yeah. Definitely.

VentureBeat: When you’re making an investment personally, what are you looking for in a founder of a company?

Gilbert: We’re looking for a person that is not chasing money but is building something. One of our things is that money follows; it does not lead. So we want people that are fired up and passionate about their mission … and people that aren’t so married to spreadsheets and thinking that kind of voodoo controls the future. Because it doesn’t.

So people that are fired up about building business and not greedy money chasers. We think that eventually those people end up being wealthier anyways.

VentureBeat: You run a lot of companies — over 50. How do you manage your time? How do you stay productive? 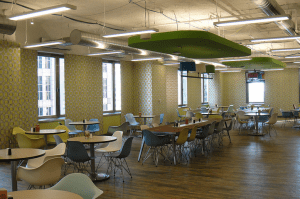 Above: Another cafeteria at Quicken Loans

Gilbert: I’m still focused on the flagship businesses: Quicken Loans and RockBridge, the title company, and some of the board stuff in the gaming. The other stuff … I’m aware of, and I’ll definitely get involved in a couple of startups — like this UpTo, it’s one of the startups that has a real shot, if they can get it right.

But we just have great people in a lot of places.

VentureBeat: You’re doing a lot in Detroit. Why is Detroit a good investment?

Gilbert: Detroit’s a good investment because, first of all, the entry fee for everything is lower. And, you’ve got the talent that is here that is ambitious and motivated, so you’re going to get in on a much lower cost structure in every way, shape, or form from labor to buildings to whatever.

I think the competition for talent is probably less — from reading your stuff and others — I think Silicon Valley, it’s like crazy. …

There’s still definitely more jobs than engineers here, but you don’t get too much movement, and there’s a Midwest work ethic that sounds hokey. But I think there’s some truth to it. And the city, it’s just one of these place that you can really impact the outcome of … you get the feeling that something special is about to happen or is happening.

VentureBeat: When will you know that you’ve won, that Detroit is back? 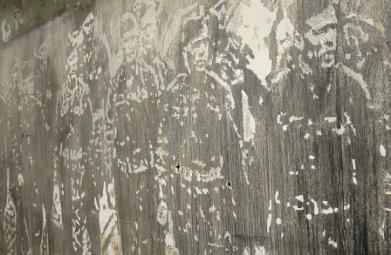 Above: In the basement of one of Gilbert’s buildings, a chiseled-out image of civil war soldiers on a concrete wall. The image is only visible from an angle, and the artist’s name is a secret.

Gilbert: That’s a great question. I don’t know if there’s ever a finish line, but we sort of envision that there are hundreds and hundreds of entrepreneurial businesses along this corridor, where there’s a lot of residential buildings and people are living down here with great retail.

And that’s all happening, not just with us but with others … a lot of things in the works.

When we know that the vast majority of our brain talent that’s coming out of University of Michigan or Wayne State, we know that talent is staying here — that the first thought is not moving to New York or L.A. or San Francisco, or when that’s the small minority — then I think that we’re taking major steps at least.

And did you meet any of the interns we have down here? We brought in 600 interns from 157 colleges and universities around the country.

Of all the things we’ve done, there’s nothing more important. In a speech I did last Friday, I put some of the comments from the interns, saying things like, before I wouldn’t have considered Detroit, now I’m going to stay. That’s the biggest most important thing you can do … get those young people.

VentureBeat: Best advice you ever got?

VentureBeat: Riskiest business decision you ever made?

Gilbert: Buying a pro sports team is risky … especially with one guy who had a few years left on his contract [Laughing, referring to LeBron James]. 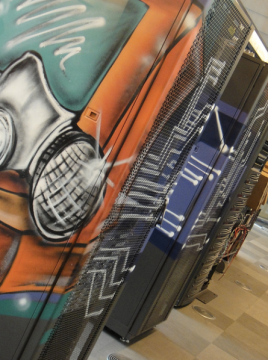 Above: Servers in Quicken Loans headquarters

VentureBeat: If there’s one thing that you want people to know about Detroit for a business office or tech startup, what would it be?

Gilbert: Get here and get the feel, because it sells itself. Don’t miss out, because you have an opportunity on the ground floor of something very unique.