If you want to understand of the sort of magic that Google Glass could one day create, take a look at what Daqri is doing right now.

Founded by roboticist Brian Mullins in 2010, Daqri builds augmented reality experiences using just the power of the average smartphone camera. Simply point your device at a compatible surface or object and watch Daqri’s mobile platform do its thing. (The approach has been successful enough so far that it helped Daqri raise $15 million last month.)

But while the Daqri experience already often borders on magical, what’s especially enticing is what will happen once devices like Google Glass become both more powerful and more commonplace.

“We think that there are some really novel uses for mobile devices, but when you move to an always-on, hands-free display, things get really, really exciting,” Mullins told me. 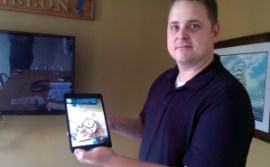 And I’d say he’s understating things. Daqri’s augmented reality platform on something like Google Glass won’t just be exciting — it will completely change the face of augmented reality. Augmented reality today just doesn’t compare to where its going to be in a few years, or even 18 months, as Mullin’s argues. The smartphone is just a stop-gap.

Part of the problem with augmented reality — or “4D” as Daqri likes to call it — is that right now the process of interacting with augmented objects is, well, a pain. Not only do you first have to know the object you’re looking at can be augmented, but you also have to dig out your phone and open an app before you can view it. Then, you have to stand there pointing your phone at the thing. (This is the same problem that’s plagued both QR codes and mobile payments, by the way.)

Devices like Glass change that dynamic entirely, which is why Mullins is so excited about the technology. “Any head-mounted display that removes some of that friction is interesting to us,” Mullins said, understating things again.

But the user experience is only half of what Daqri is trying to improve. In order to fully flesh out its vision, the company has to ensure that cameras can better understand the world around them. “4D platforms need to know that that’s a table, that that’s a wall, and that’s the floor. Our new algorithms finally let us do that in the higher-end devices. In a generation, everyone will have that capability,” Mullins said.

As if all of this wasn’t enticing enough, Mullins and Daqri are already experimenting with how to take it all a few steps further. Imagine controlling 4D objects using just your mind, for instance, or getting objects beamed directly into your brain without the need for a physical interface at all. This the stuff that gets Mullins the most worked up, and if he has his way, it’ll all be pretty commonplace in only a few years.

In the short-term, though, what Mullins really wants is for the term “augmented reality” to die .”‘Augmented reality’ is like ‘information superhighway’ at this point. Once this thing catches on, no one’s going to be calling it that anymore. It won’t even have a name. It will just be reality,” he said.

And for once, he isn’t understating things.