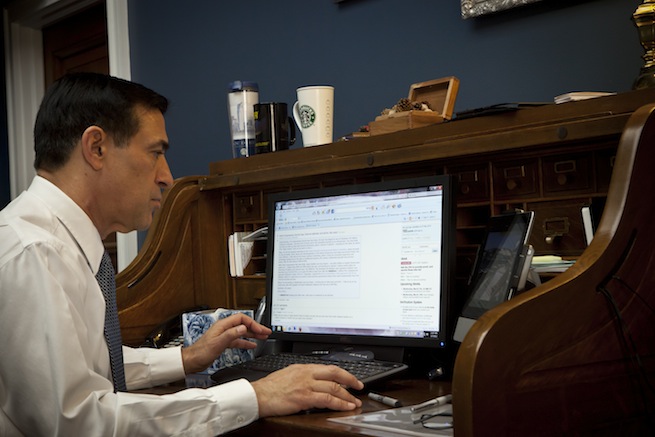 Having Issa participate in a Reddit AMA (Ask Me Anything) is a big deal because the site generates over two billion monthly page views and regularly conducts discussions that are entirely policed by its own users.

Issa is head of the House Oversight and Government Reform Committee, strong opponent of the Stop Online Piracy Act (SOPA) as well as the Senate’s Protect Intellectual Property Act (PIPA), and a vocal critic of the European “trade agreement” ACTA. Issa recently published the entire ACTA text online, as VentureBeat previously reported. He’s also a self-proclaimed “Internet defender” with 37 patents to his name. Basically, that makes Issa one of the most qualified members of Congress when it comes to issues involving patent and copyright legislation.

Some of the most popular questions Reddit users asked Issa centered on the government’s involvement in curbing piracy through legislation.

“Any solution needs to be inclusive of everyone involved or impacted — content producers, copyright holders, individual Internet users, digital job creators, etc.,” Issa wrote in response to a question about a valid approach to preventing piracy without having the government infringe on a citizen’s basic privacy rights. He also explained why the OPEN Act, which he authored, is a better alternative than SOPA. “I think the OPEN Act is a good balance of increasing protections for our inventors and artists without giving government new, invasive and Internet-destabilizing powers.”

When asked why so many publishing companies are trying to limit our freedoms on the internet, Issa replied: “Publishers and all intellectual property owners will always take the most strident position, in an attempt to maximize their return on their investment. The Internet will always have those who will seek less restrictions on intellectual property, regardless for the need for a return on the investment of the IP creator.

“I fought to defeat SOPA and PIPA because they were bad pieces of legislation and went too far in harming the Internet,” he added.

Many people criticized SOPA and PIPA because they would have given federal authorities the right to shut down any foreign-based website accused of infringing on copyrights and committing acts of piracy. Those pieces of legislation were far too vague in regards to how “foreign website” was defined and didn’t offer enough protection to those that were being falsely accused of piracy by copyright holders trying to eliminate competition or negative criticism.

Despite Issa’s attempts to appeal to Reddit’s masses by mentioning his love of gadgets and Battlestar Galactica, the site’s users also drilled the congressman with some hardball questions. For instance, one Redditor asked how Issa could claim to be a defender of the Internet while supporting legislation in 2008 that allowed the government to conduct warrentless wiretapping.

“After 9/11, an extraordinary amount of cooperation by our communications industry was necessary to find out who was responsible for the deaths of thousands of Americans, and who continued to pose an active threat to Americans in our country and around the world,” wrote Issa. “Americans in the telecom industry were called into classified sessions and asked to help in this effort and were asked to tell no one, not even their own coworkers. Some would say Bush had no right to do that, but that’s a fight (with) the Executive Branch and Congress.”

While not everyone was pleased with Issa’s responses, the majority of people who had their question answered seemed appreciative. The congressman said he’d attempt to answer more questions from the Reddit post later today.