Darren Cox took the long way to esports industry. He spent a couple of decades in the automotive industry at the alliance between carmakers Renault and Nissan. He handled franchising, digital marketing, product management, sponsorships, events, and other things.

He’s big fan of the racing video game Gran Turismo, and he always wanted to find a way into the industry. He ended up being head of motorsport and performance brands for Nissan in Japan. Then he set up the GT Academy partnership between Nissan and PlayStation, where fans of Gran Turismo were trained to be real-world race car drivers. That helped him see the intersection of race car driving, video games, and esports.

And now he runs a company that is at that intersection. In July, he became CEO of Millennial Esports, which announced this week it is building an esports racing game arena in Miami. The company makes everything from free-to-play mobile racing games to $250,000 simulators that shake and roll when you drive around the virtual tracks. Rubens Barrechello, the famous race car driver, is an adviser.

I spoke with him at the Esports BAR Miami event last week, where he gave a talk on the new business. Here’s an edited transcript of our interview. 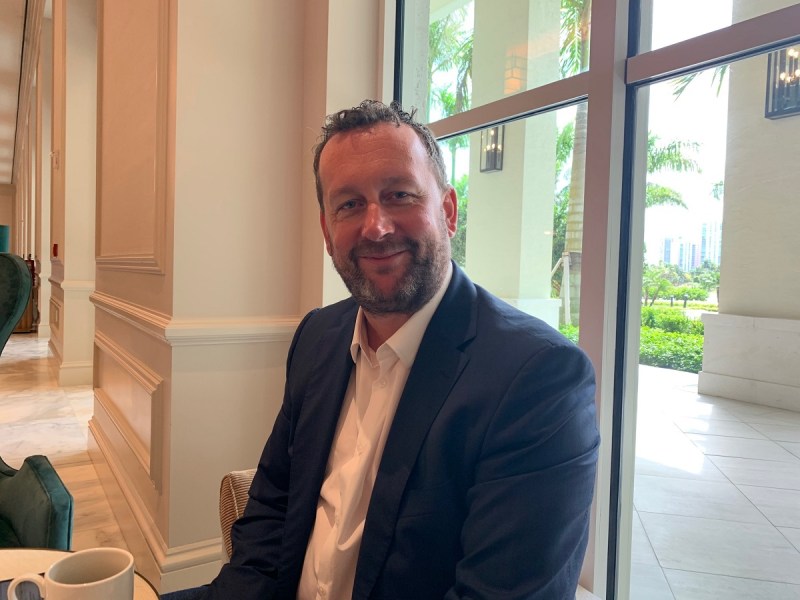 Above: Darren Cox, the CEO of Millennial Esports.

GamesBeat: The announcement today seems like a big commitment to getting physical space. How do you go about doing that? Have you figured out where it should be, how big it should be, what you want to target?

Darren Cox: Our business is — I took over as president in July. We’ve had a strategic review of what we do. In the short term we’re going to focus on two areas. One is data. The first thing I talk about with everyone is there’s not enough data in the esports space. When you sponsor an NFL team or sponsor a soccer team or whatever it might be, you can go to Nielsen and get data that tells you the value of what you’re doing.

At the moment Nielsen are trying to do that in this space as well, but we have a company called Stream Hatchet. I don’t know if you’ve heard of them. They do all of the data around streaming platforms. At the moment they’re focused on esports and gaming. That’s one part of the business, the horizontal if you like.

In terms of our vertical, we have some really cool assets around the racing game space. We have a huge amount of background in that area, obviously, from my background. In terms of assets, we have Eden Games, who make free-to-play mobile games, including the Formula One mobile game. That’s the bottom of the pyramid. At the top of the pyramid, we just bought a company based between Maranello and Miami who make simulators, up to $250,000. When you want to get rid of your Ferrari in your garage, which I’m sure you have, you can put a $250,000 simulator in your garage and just drive around at home.

We cover everything in between. One of our platforms is World’s Fastest Gamer, which is effectively a TV show based on racing games. The winner of that game this year becomes a real racing driver. We take kids who’ve never sat in a racing car before, who’ve been driving on simulators, and we make them into real race drivers.

One of the concerns, apart from data, that people have that I speak to, is that the revenue model is unclear in esports. We have all these people investing in some fantastic franchise models. They’re betting on the future, and I think it’s clear that the eyeballs should guarantee that that investment is a good one over a number of years. People are looking five or 10 years out, as they would have done for a Major League Soccer franchise. 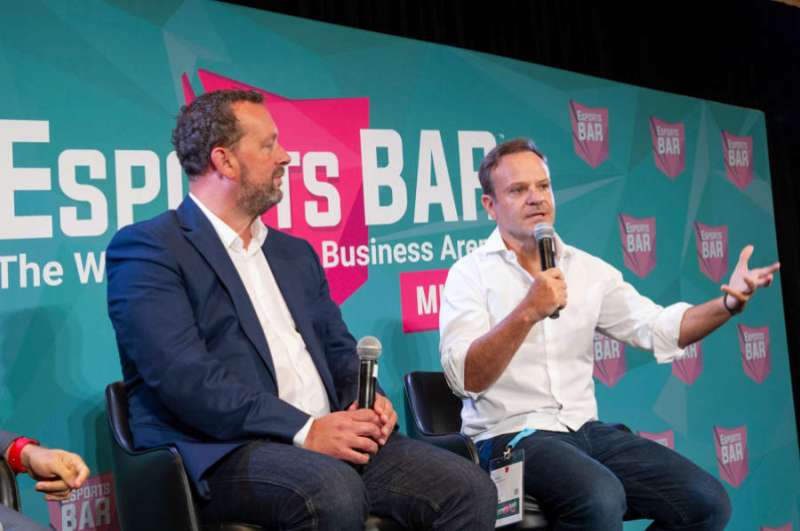 GamesBeat: How does esports come in?

Cox: Our view is that esports is the marketing platform, effectively. If it breaks even, fantastic. But actually, in terms of revenue, you’re further down the pyramid. That’s why the first thing I did when I had some input into the company was go and buy a publisher, Eden Games, that makes racing games. They make the Formula One game, and we can make our own games. I think that’s the model. Of course you have competitions, call them esports if you will, and that drives interest in the game, but actually the revenue model is down at the bottom.

We have bought a simulator company. The guys that own that company are ex-Ferrari F1 engineers. They engineered Michael Schumacher back in the day and saw this coming. Nine years ago they saw this coming. They left Ferrari and set up in the simulator business. They’ve run the Ferrari driver academy simulator activity for those nine years.

We were looking at this opportunity. We’re putting on our own events. We do roadshows and all this stuff. In the end, we were buying a lot of stuff. We said, “Let’s go and find the best simulator company we can.” We bought Allinsports. Within that conversation, they have a facility in Miami, which is basically four simulators, some big driving simulators. The place is packed every day with people in there.

Then you start looking at the model. If we put this on an industrial scale, if we put 30 simulators in a venue, during the week–it’s just like go-karting back in the day. You and I would have gone go-karting. You pay your 10 pounds for 20 minutes. In the U.K. it was in an old bus shelter. These things are cash cows. There’s cash coming in all the time. You’re using that facility during the week from a retail point of view, and then on the weekends you hold racing esports tournaments. The vision is that we have a number of these facilities around the world. They’re all linked. We can have global competitions for cash, for prizes, for whatever.

In addition to that we’ll have a broadcast facility there. Then we can turn that into our studio and content delivery platform as well. On top of that, part of this facility is that you can go and be on what was the Ferrari simulator for the young drivers. We have three of those in the back. Let’s say it’s Tuesday afternoon in Miami. You pay your $25, and if you’re quite good at that, we then see that you can go into the big simulator in the back, the moving one that looks like a Ferrari, but it’s in the wraparound. If you’re doing driver training in that facility, you’ll spend $1,000 for half a day. 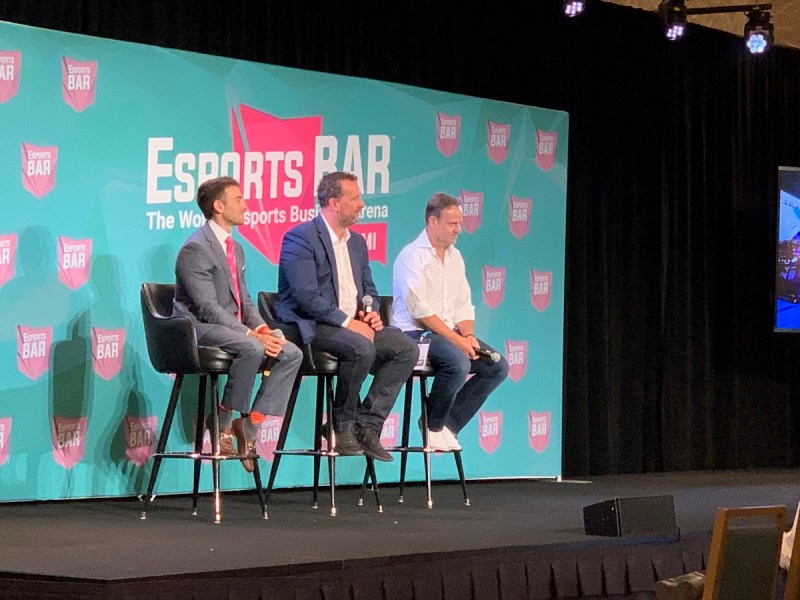 GamesBeat: There’s a spectacle factor to racing. You can start playing in your home, but you can go to these places that are something else entirely.

Cox: Exactly that. The ultimate model, we have the World’s Fastest Gamer program. We did it with McLaren Formula One in the first season, shown on ESPN. We’re doing it with Aston Martin this year. The competition prize for that is you get to be a real racing driver. If you’ve heard of a project called GT Academy, between Sony and Nissan, we had 23 entrants who’d never sat in a racing car before, and they became racing drivers.

Imagine you turn up and pay your $25 to go to the Miami facility. Then you go in a real simulator and we say, “You should enter this competition on the weekend.” You go into that competition and part of that competition prize is to go forward to the country finals of World’s Fastest Gamer. You could spend $25 and end up racing a real car. Yes, we’ll have virtual qualifiers, but we also think there’s this physical desire for people to actually touch and feel the steering wheel. Now, of course you can buy a Thrustmaster steering wheel or a Logitech for a couple of hundred dollars, but it doesn’t give the same feeling. Our simulators, the base ones we use are $30,000. People are interested in doing that, but still staying in the virtual world as well.

Everything we do, at the end of it, is an esports platform. It’s a TV show, a stream, whatever, but what we’re thinking about is almost the other way around. How do we drive revenue out of this business? We think that one of the ways of doing that is free-to-play mobile. We’ve ticked that box. The other way of doing it is having some physical venues. That’s just through beta testing we’ve done. This venue has six simulators in it, and it’s busy every day. One of the people there every day is Emerson Fittipaldi, with his sons and grandsons. That’s the sort of draw we’ve got.

Miami is the perfect place for it. A lot of people are interested in racing. There’s a big car culture. Then we’ll look at the next venues. Likely the next will be in the U.K., because of the car culture there. Once we establish our big flagship venues, we’re already talking to people about a franchise model, where they’ll take this on. Even to the extent of having a small pod which we’ve developed, four simulators–you could literally roll it in here and have it over there. It’s linked.

Imagine on a Friday night, say at your local cinema, you go along and you can compete against the guys in Miami, in Tokyo, in London, wherever it is. Of course, normally you would do it on your own, but look at the LAN centers and the explosion of that. People do want a community. They want to come together, as well as racing online. Then you add, in terms of revenue from our side, food and beverage, apparel, everything else.

GamesBeat: How do you deal with the particular challenge in gaming, where certain games can be fleeting in popularity? That can change, whereas you have this permanent facility and you want to keep it busy.

But remember that Gran Turismo is almost 25 years old. Forza, we’re on the seventh generation, 14 years old. There’s always going to be people that want to play racing games. Of course we might have to adapt. At the moment we’re using high-end simulation products like rFactor and Assetto Corsa. We might have to change the game. But since the second car was ever built, people have raced each other. It’s the same in the real world.

We did a survey three years ago where 78 percent of racing fans that were playing games played games first and then became racing fans. When I was a kid, I went to a race when I was 18. I smelled the oil and the burning rubber and everything else, and I became a fan. These guys are finding their fandom through racing games. There’s still the car culture. There’s still an interest among young men, predominantly. It’s just that the car manufacturers aren’t talking to them in the right way, because they’re doing it the way they talked to me 20-30 years ago. This is why we have young people on our team, not just old guys like me.