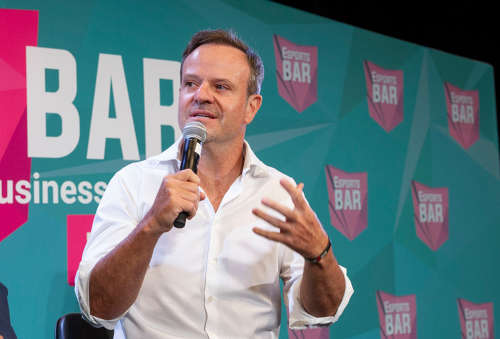 Above: Rubens Barrichello is a Brazilian race car driver.

Cox: The answer’s no, we don’t want to do it at race tracks. We have an office at Silverstone race circuit, the F1 circuit in the U.K. On a Tuesday afternoon, this is about as busy as it is. There’s about 10 people in there. On Grand Prix weekend there’s 120,000 people there for three days, camping out. You can’t move. I live 10 miles away and you can’t move.

We need to be where there’s already a volume of people. It’s almost like putting down the footprint of a cinema. You need a big car park, an area where there are lots of people. But the key thing about this is you have to have car culture. You want high disposable income, but with car culture. Miami is a perfect place. Miami has a huge car culture. The U.K. has a huge car culture. Somewhere like Dubai or Singapore, these are the sorts of places we’ll go. We probably won’t go to, I don’t know, Norway, because it hasn’t got a car culture that would drive people to be interested. We will absolutely pick on that basis.

GamesBeat: Something like a mall in a city that has a race track.

Cox: Yeah, absolutely. One of our facilities is in Maranello, right by the Ferrari factory. That’s a fantastic car culture, but there’s not enough people. But if you went to somewhere like Milan or Turin, there’s still Ferrari fans, but there’s a lot more Ferrari fans. That’s the model we’re looking at in terms of the demographic and the footprint of these spaces.

We can scale it. This is going to be the biggest one, the flagship, but we’re also looking to get into retail spaces like cinemas, for example, where you just have the four-berth one. It’s like an old arcade, basically. When I was younger I drove Daytona and Sega Rally in the arcade. These guys want a more realistic experience than an arcade game. They want a real simulator. That’s what we’re providing. 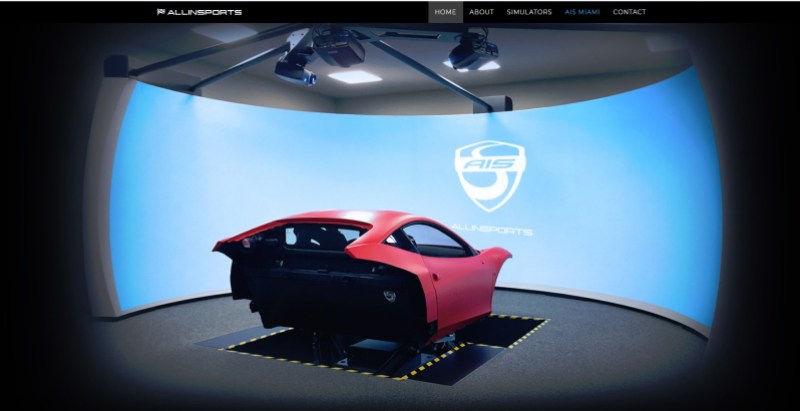 GamesBeat: How do racing games stack up as esports compared to some of the better-known games?

Cox: Completely different. We’d never say we’re in competition with the other games. We admire what they’re doing. We learn from them. We understand the volume. But it’s a very different audience and a very different business model.

What it does do, we talk to brands that don’t want to be–first of all, some of them don’t understand. Not the brands that are here, because they’re here. But brands that don’t understand the other esports. They also don’t want to be involved in certain types of games. They can understand racing. They understand that putting a sticker on a car, or a virtual car in this case, or the side of a track, puts branding there and someone can give them data on how many eyeballs saw it. It’s an easier jump into gaming and into esports from not having any background — racing, football, Madden or whatever it is, the real sports.

We’re learning from those, but of course part of our business is Stream Hatchet, who deliver data. We’re monitoring all those other esports and seeing some really interesting trends. We’re learning from a media point of view, from a streaming point of view, from content. But we’re more aligned to the automotive and motorsports side than esports. We’re in the middle of these two huge industries. Gaming sitting over here, a $110 billion industry. The automotive industry, almost trillions of dollars of spend. We see that it’s a very different model. We think we have benefits and others have benefits. 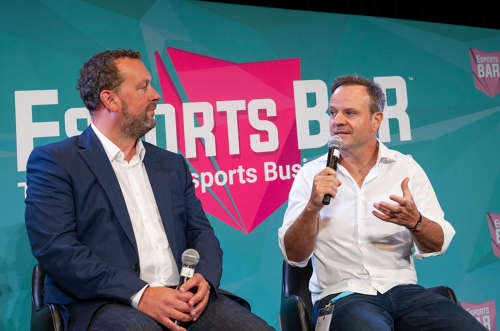 We’ve had sponsors come to us and it doesn’t work for them. We’ll say, “Okay, have you looked at some of these other championships and leagues?” because of the data we have through Stream Hatchet. We’re all gamers at heart. That’s the important thing. We have our niche, and I think it’s important that everyone works together in this industry. It isn’t Fortnite versus League of Legends or racing versus Madden. Everyone needs to work together to build this industry, be professional, provide the right face to the outside world, and grow as much as we can.

GamesBeat: What was your background? What brought you here?

Cox: I spent 20 years in automotive. I got a name through GT Academy, which I told you about, between Nissan and PlayStation. But I was 20 years at the Renault and Nissan alliance. I did everything from franchising, digital marketing, product management, sponsorship, events, whatever. I ended up being the head of motorsport and head of performance brands for Nissan in Japan.

I had a good apprenticeship in the automotive industry, but I always tried to get in the gaming side. I was a massive Gran Turismo fan. That was my game when I was growing up, as well as EA hockey.

GamesBeat: How did Spencer get involved?

Cox: Spencer’s working with us–he’s an analyst, basically, new to the business. He’s looking at the esports space as a business and trying to make sense of it for all of us. Obviously, being younger, he gets a different set of eyes on it. We’re in acquisition mode at the moment, and Spencer’s helping us identify some of the acquisitions out there. We’ll make some announcements in the coming weeks that I think are really interesting.

We have two things. We have this horizontal of esports, if you like, and then we’re in the vertical. We’re expanding our horizontal to try and have some different spaces just outside of esports racing. That’s what Spencer is working on.

Spencer: I think it’s important to target the younger audience in this market, especially with the growth and especially with racing. As far as my racing background, I have friends and I know what they like from racing them online previously. 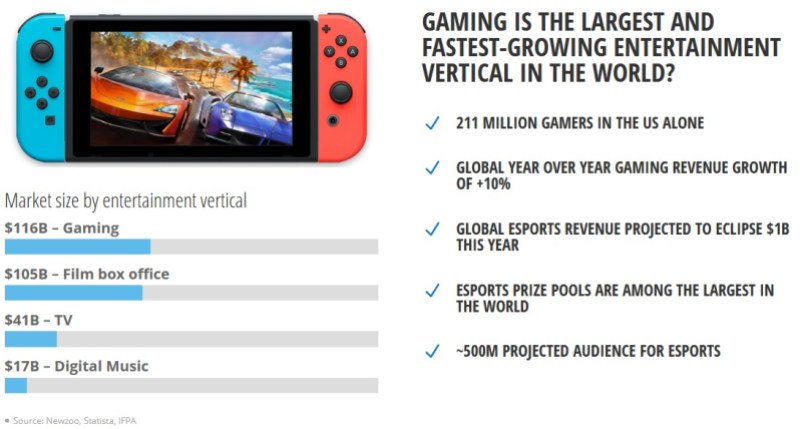 Above: Esports is part of a very big industry.

GamesBeat: With someone like Electronic Arts and Need for Speed, do you think they could be talked into having events at your venues?

Cox: Absolutely. We’re platform-agnostic. We’ll take everything, from Mario Kart to rFactor. Our simulators are really designed to be at the professional level, so it’s the rFactors and the Assetto Corsas and iRacing as well, but absolutely.

The other thing we’re going to do from a utilization standpoint, we want to use that facility for gaming, esports, fashion–there are so many events in Miami where people want space. Of course our primary focus is esports, and on top of that is racing, but the venue is going to be one of the coolest venues in Miami. We can expect to have fashion, car launches, product launches. It’s a cool area of Miami, although I don’t think there’s really an uncool area of Miami. But that’s our approach.