Can a GPS device really be a platform for developers? Dash Navigation, a Silicon Valley company that offers a GPS-enabled technology for your car, is betting so.

And that’s bringing some cool Web-based applications to the automobile.

The company launched its vaunted Web 2.0-style global positioning system navigation unit for cars in March. Now it is revealing today that third-party developers can make applications to run on the Dash Express unit.

Dash, based in Sunnyvale, Calif., has built a GPS device with two-way communication so that drivers can access data while driving and transmit their own personal traffic data so that Dash can calculate drive times for routes. The company released its applications programming interface (APIs) so that developers can create applications called DashApps to give consumers access to a variety of web-based content in the car.

This is a great move, and comes after we originally criticized the company for being too closed.

The first applications from five developers will be available on May 15. They include a way for Dash drivers to access real-estate listings and property details from Coldwell Banker. It lets drivers instantly create a route to properties up for sale. Another is the Funambol calendar button, which allows Dash users to access their electronic calendars from the Dash device in the car. 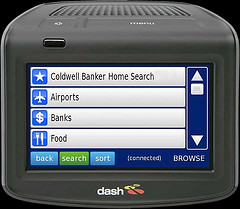 The Mediaguide, meanwhile, lets Dash drivers find out the names of songs playing in their radios. The Trapster warns drivers in real time about live speed traps or red-light sensors. And WeatherBug can provide current weather conditions for drivers. The company will show the DashApps at the Where 2.0 conference today in Burlingame.