For the last three years, data center security company vArmour has been in stealth mode, raising capital and developing its product. Now, after a year of beta testing, the company is emerging.

vArmour is part of a growing number of security companies that are developing products for a virtualized world. Rather than try to lock data into place on a single server, vArmour’s software looks at all of the data flowing into and out of the network. Using big data analytics, vArmour identifies “clusters” of related threat probes and determines whether these communications are normal, suspicious, or a serious threat. 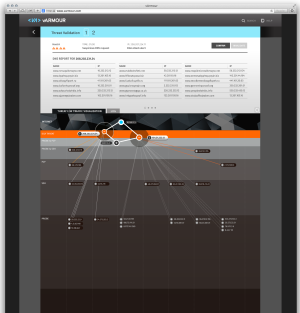 This approach is a lot less reliant on security analysts to make connections between data points, cutting down on human error. Instead the software gives security analysts enough information, tagged and organized, to make fast decisions about potential threats. vArmour’s software also aims to give analysts a much fuller view of what’s going on in their data centers.

A lot of data center security has focused on securing the perimeter, watching what goes in and out of the network, but not what goes on inside the network. So that if a threat were to sneak in undetected, it could make slow, calculated moves over the course of months without anyone really noticing. “We saw a bad guy that would only try to do lateral spread during the maintenance window,” vArmour’s VP of product, Keith Stewart said. Maintenance windows are great, because data center communications often look out of sorts during this time. “3 am to 5 am is when he moved around,” said Stewart.

Most security systems, having found a threat, would contain and stop it. But then security analysts wouldn’t necessarily know where the threat came from or what other entry points it probed.

Stewart calls vArmour’s approach “proactive security as opposed to blind blocking.” vArmour’s software tracks how a threat moves around once it’s in a system, so security analysts can see both areas malware tried to probe and where it succeeded.

More important than identifying threats, using big data to understand a data center’s ecosystem also lets users see employee errors — not just cyber threats. “We deployed at a really large, famous e-commerce provider in the US, and they saw unusual traffic and bad traffic and everything in between, but they also saw stupid people doing stupid things that you’re not allowed to do, but they did it,” CEO Tim Eades told VentureBeat. Finding gaps in security is just as much a part of securing a data center as blocking threats from getting in.

And as everyone is starting to realize, keeping data and networks secure is super important for building consumer trust and keeping proprietary information secret. Insecure networks are also costing us money. Cyber crime potentially costs the global economy more than $400 billion annually, according to report by McAfee.

vArmour is just a touch ahead of the curve by leveraging big data in this way. In recent years, processing power has become strong enough to analyze large amounts of data quickly. Before, it would have taken too long or just been generally inefficient to do security this way. But now that the technology exists, the opportunity to develop new, more accurate, cyber security software is wide open.

Since founding, vArmour has raised $42 million.