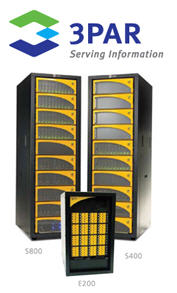 The very public bidding war between Dell and HP for the data storage company 3Par may finally be coming to an end. HP announced today that it increased its offer for 3Par to $33 per share — or $2.4 billion. Shortly thereafter, 3Par announced that it will accept the offer, and Dell said that it won’t revise its previous $2 billion offer, and will pull out of acquisition talks.

HP didn’t give up. It returned with a $1.8 billion offer, which it quickly upgraded to $2 billion. Dell matched that with a $2 billion offer of its own, which to many at the time seemed like the most the company could afford (HP reported $115 billion in 2009 revenue, compared to Dell’s $53 billion).

3Par will be forced to pay some $74 million to get out of its current agreement with Dell.

Given the increasing importance of cloud computing — in which users would rely on the internet instead of their local computer for applications and storage — having a company like 3Par in your corner would allow you to offer services in the cloud at a lower cost. That’s certainly what Dell and HP are looking for, and I suspect we’ll see further plays in this field in the coming months.