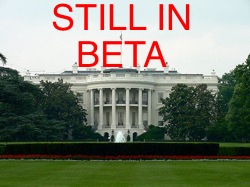 After checking out the Obama administration’s newly-launched Data.gov website, I’ve come away with an impression similar to my initial takes on the revamped WhiteHouse.gov site and Recovery.gov, the site for learning about how the government’s $787 billion stimulus package is spent — great idea, weak execution. But both WhiteHouse.gov and Recovery.gov improved substantially in the following months. I’m starting to think the administration should slap a beta testing label on its websites, making it clear that they’re just an a rough demonstration of the potential, with many more features and improvements planned down the line.

A beta label would certainly cut down on my complaints about Data.gov, which is supposed to be the central website for finding the data that government agencies have already made available to the public. ReadWriteWeb’s Marshall Kirkpatrick has a nice rundown about how there’s not much data on Data.gov, and what’s there tends towards the uncontroversial. For example, the only “data” from the Federal Bureau of Investigation is a widget listing the 10 most wanted — we’re not exactly striking a blow for transparency, here. As a business and tech reporter, I’d particularly like it if data from the Securities and Exchange Commission gets added soon, since those documents fuel many of the stories in the tech blogosphere.

My bigger complaint is the fact that Data.gov isn’t doing enough to make the process easier for your average user. I understand that that the “raw data” isn’t going to be that useful for non-techies, but even the “tools” aren’t as accessible as they should be. For example, I wanted to see the chart of airplane displays frm the Bureau of Transportation Statistics, but Data.gov just sent me to the bureau’s site, where I had to download a 22 megabyte ZIP file. Is this “democratizing data”? Only if you can democratize something by making it accessible to the hardcore policy wonks and developers.

As always, I think it’s very cool that the administration is even trying to do this, and I’m hopeful that the site will improve in the coming months. Meanwhile, the Sunlight Foundation has launched a new Apps for America contest for developers who do interesting things to illustrate the data. The site might also provide a rich source of information for Google’s efforts to chart public data.