More data scientists around the world are looking to apply their skills to helping budget-strapped nonprofits rather than just help businesses sell product.

DataKind, a nonprofit that’s devoted to connecting well-meaning data scientists with groups seeking pro-bono help, is announcing a substantial expansion today beyond its New York roots and its United Kingdom outpost. It is expanding to Bangalore, India; Dublin, Ireland; Singapore; Washington, and San Francisco, the de-facto data science capital of the world.

“This marks a really big step forward,” Jake Porway, DataKind’s founder and executive director, said in an interview with VentureBeat. “Now let’s create these other hubs that can keep this data-for-good effort moving.”

In April, DataKind put out a call for applications for data scientists who wanted to form local chapters. Almost 100 people from more than 60 cities responded, Porway said. The result: a total of six chapters across three continents.

The growth suggests that as more data scientists emerge to make suggestions about product development or strategy after analyzing data in a business setting, a substantial number of them want to use their know-how for causes that go beyond corporate objectives.

Other programs have emerged to enable and manage that sort of well-meaning work.

Heck, there’s even a place on the Internet now for socially conscious data scientists to show off their work. It’s called Data for Good.

But DataKind, established in 2011, has the distinction of gaining momentum before these other programs. It arose after Porway, who has a background in statistics and computer vision, started wondering how his technical tinkering could be applied. 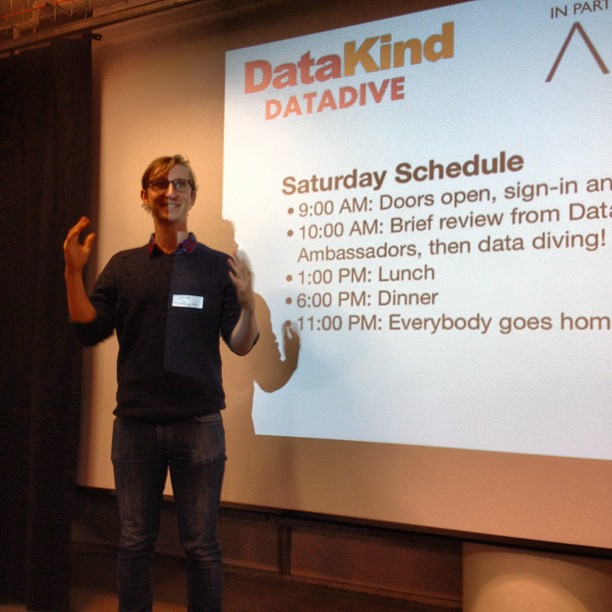 Above: Jake Porway, founder and executive director of DataKind.

He was “just looking to my friends and saying, ‘Hey, does anybody want to, you know, try to hack or use our data science skills with a nonprofit or a social purpose?”‘ he said. He wrote a blog post on the subject that got plenty of attention, even from the White House, he said. Three years later, the organization has become truly global. And the organization has worked with Amnesty International, the Grameen Foundation, the New York City Department of Parks & Recreation, and the World Bank.

It’s especially sensible for DataKind to have a presence specifically in San Francisco, which seems to have more data scientists per capita than any other city. The city boasts plenty of data science startups, startups hiring data scientists, and training programs for the field.

One might think all the data scientists with social inclinations would already have gotten themselves associated with other data-science-for-social-good groups by now. Not so, apparently.

“In the Bay Area in particular, we have seen no shortage of interest in volunteers who are capable and are not already affiliated with one of those other groups,” Paul Ellwood, director of data science and engineering at Netflix and one of four DataKind San Francisco chapter leaders, told VentureBeat. “As much as possible we try and not cannibalize from each other or poach volunteering communities. I think there is enough opportunity for great work to be done with distinct sets of volunteers that we shouldn’t worry about stealing from each other.”

And the groups aren’t fighting over nonprofits, either, Ellwood added.

Ellwood and the other San Francisco chapter leaders — Pashû Pathina Christensen of the Hive Think Tank, Katharine Matsumoto of Salesforce.com, and independent consultant Aman Ahuja — didn’t want to talk about the types of projects they might end up working on in the Bay Area. They’re in talks with several organizations, Matsumoto said.

But Ellwood did have an idea about what the chapter’s work could lead to.

“I think that nonprofits are typically relatively resource-strapped and data science happens to be an area that really helps you identify where to spend your effort,” he said. “You can identify opportunities that are going to have a greater payoff than other opportunities. I do think through the use of these projects, we can help nonprofits get abetter at applying their resources in areas where they can maximize impacts and identify areas that would be wasteful of resources.”

And Ellwood hoped that the chapter’s work — alongside that of the five other ones — might result in technology that nonprofits in many other places could use.

“It may result in a resource kit for how, you know, education nonprofits can identify high-potential students or, you know, pick your area,” he said. “Our thinking is not that we’re going to just have point-to-point contact with individual nonprofits in the Bay Area but rather we’re going to be looking for solutions that apply more broadly and really help a class of nonprofits apply these techniques efficiently.”