Dauria provides low-cost micro and nano satellite services to clients that seek to observe the earth from space, thus fostering a brand new platform of apps and services. Some of the applications would be able to do things that could impact our daily lives, such as monitoring a farm’s vegetation, tracking traffic of various transportation infrastructures, polar broadband services, and more. Essentially, we’re not really doing as much as we could with satellite technology and Dauria wants to do something about it. Admittedly, this is less sexy than the possibility of a manned mission to Mars, or colonizing the moon, but the company’s focus is still very interesting.

Dauria said it plans to use the additional capital to continue working on existing contracts from a handful of very important clients, which include NASA, the European Space Agency, Samsung, Russia’s federal space program Roscosmos, and others. It’ll also continue work on its satellite data app platform CloudEO. 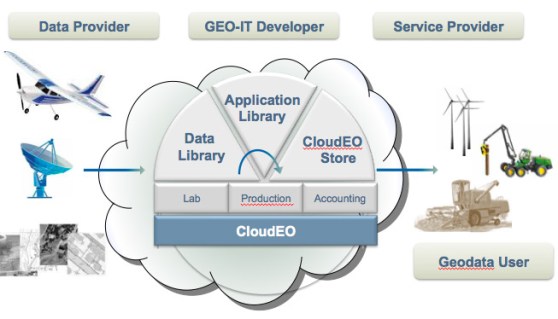 Above: Diagram of how Dauria’s satellite app platform will function.

“In the two years since Dauria Aerospace was founded, we’ve reached several key milestones in technology development and have successfully secured contracts and established our global presence,” Dauria Aerospace president Mikhail Kokorich said in a statement. “We are confident that with our new partnership with I2BF Global Ventures and the invested capital, we will succeed in reaching our amplified goals in the next few years.”

Founded in 2011, Dauria Aerospace has raised a total of $30 million in funding to date. The company currently operates satellite development centers in Moscow and the NASA Ames Research Center in California.