David Jaffe was sitting in front of me in a demo room at Sony’s game headquarters in San Mateo, Calif. With decades of experience, the creator of Twisted Metal and God of War was there to show me his new game, Drawn to Death. He was looking very respectable.

Jaffe’s team at The Bartlet Jones Supernatural Detective Agency has worked on the unconventional game for more than three years, and it is finally ready for its debut on April 4 as a PlayStation 4 exclusive. For the first month, Drawn to Death will be a free title for PlayStation Plus subscribers. After that, it will be a $20 purchase.

I started playing the tutorial for the game, and by the third sentence of the dialogue, the character Johnny Savage shouted, ” I SO WANTED TO SELL THIS SHIT IN A GAME STORE! GREAT IDEA, RIGHT?” And by the eight sentence, he said, “SO TO THOSE GUYS I’M ALL NODDING MY HEAD AND SAYING SHIT LIKE, GOOD POINT YOU GUYS, BUT THAT’S ONLY BECAUSE I NEED THIS JOB! DEEP INSIDE, MAN, LIKE DEEP INSIDE, I’M SO THINKING, WAY TO LEAVE MONEY ON THE TABLE YOU FUCKING HIPPIES!”

And I thought, “Ah, this is the David Jaffe I know, full of attitude and rebelliousness.” 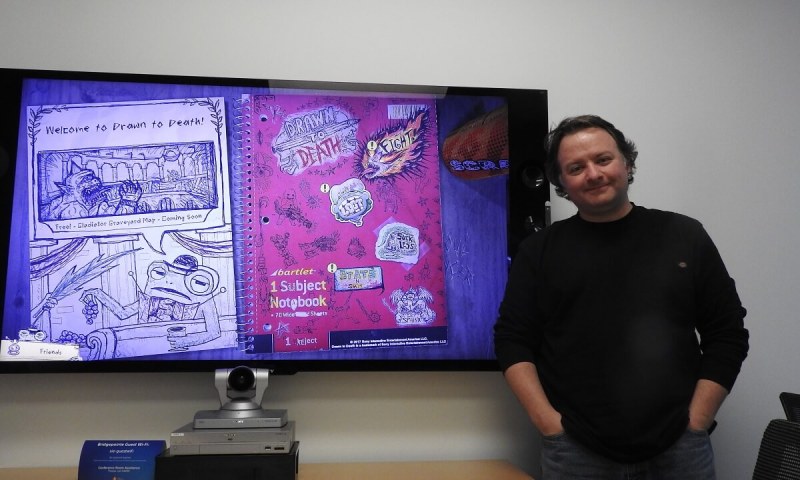 Above: David Jaffe, designer of Drawn to Death.

If I had stopped playing there, I would have understood where this game, which Jaffe describes as “Quake meets Super Smash Bros,” was heading. Full of potty mouth humor, it appeared to be Jaffe’s “f*** you” message to the gaming establishment, which is full of serious games that purport to be art.

Jaffe’s four-person multiplayer third-person shooter arena game, by contrast, is all about high testosterone action, rooted in the doodle art of a troubled 16-year-old high school student. I was thinking this was like another Duke Nukem ultra-violent, ultra-crass video game. 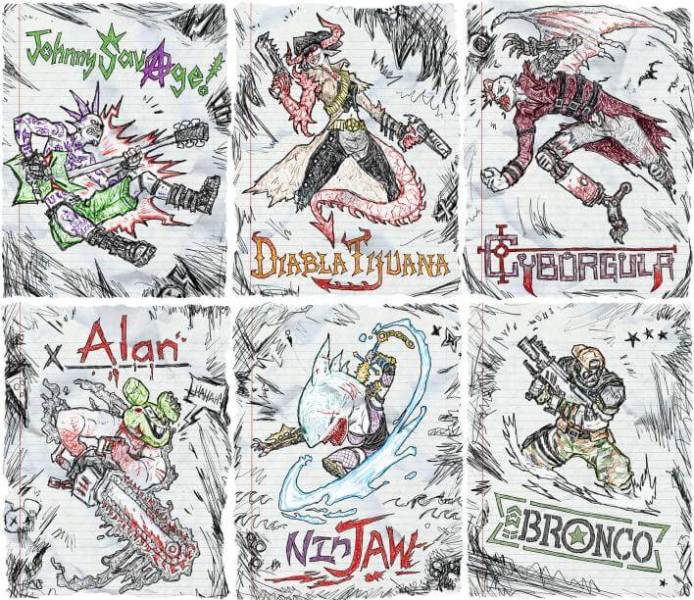 And while it is violent, it’s not so superficial. Jaffe pointed out that the game is self aware, with a sense of humor that shows that the game designers know it is over-the-top. There’s also a story behind the kid who serves as the main character, a 16-year-old teenage boy whose parents are divorced.

“My hope is that people play the game, love the game, and in loving it start to explore a bit. It’s certainly not meant to be something you come to like Last of Us and it tells you a story,” Jaffe said. “But story is all over Drawn to Death. You wouldn’t know it. It’s just a question of where you look.”

He added, “For example, if you go into the stat screen and start to look at characters, all of the characters he’s drawn, there are cell phone communications between the kid and that girl at the beginning of the class. He’s explaining the impetus or the inspiration behind each of these characters. This character Alan is based on his stepdad, who he can’t stand, who runs a chain of Magic Mouse Burgers and Fun restaurants.”

As I looked around the landscape where I was battling three other players, I saw that this was true. You could shoot at a pencil-drawn poster on the wall, and it would peel away and reveal another image that told you another little piece about the kid, who has a crush on a girl in his class. Rather than tell its story through cinematic movies that come after gameplay sections, Drawn to Death’s story is revealed through the doodle art that is embedded within the gameplay.

Jaffe said he really cares about this character and what he’s going through. He sees himself in the boy. 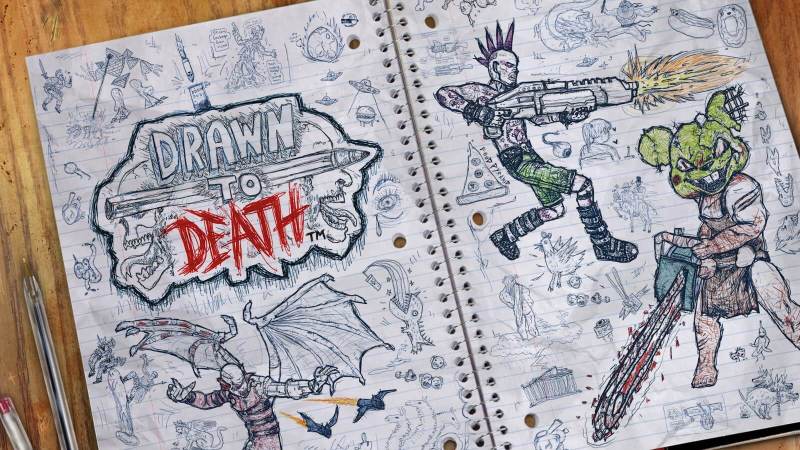 Of course, the game has some very childish humor. In the tutorial, the character tells me to speak into the microphone to reload my gun. I do this several times, and then a message pops up saying that there is no voice recognition in the game and that I’ve been had.

Ninjaw is a character with a shark’s head and large female breasts. She can get an actual monkey on her back. The monkey poos, catches the poo in its hand, and then throws the poo at an opposing player. The monkey eats a banana and gets more poo.

In the game, the teen’s doodles in his notebook spring to life, and they take shape in the arena in a very imaginative way. The battle maps are full of both the doodles and the crazy creatures that come to life from those pencil-sketch drawings.

Four players can join battle at the same time in multiplayer, and you can choose from eight characters at the outset.

“Again, it’s designed to be more like a brawler than a shooter. It’s not like you play Mortal Kombat and suddenly your version of Jax is better than mine. You just play well because you’ve learned the ins and outs of the character,” Jaffe said.

You can participate in ranked, unranked, and friendly matches. You can set up your own games with your friends when you all go online. You choose your character, and then you can change your skin. If you hit triangle on any of the characters, you’ll zoom in and you can use the stick to see some of their unique aspects, Jaffe said. 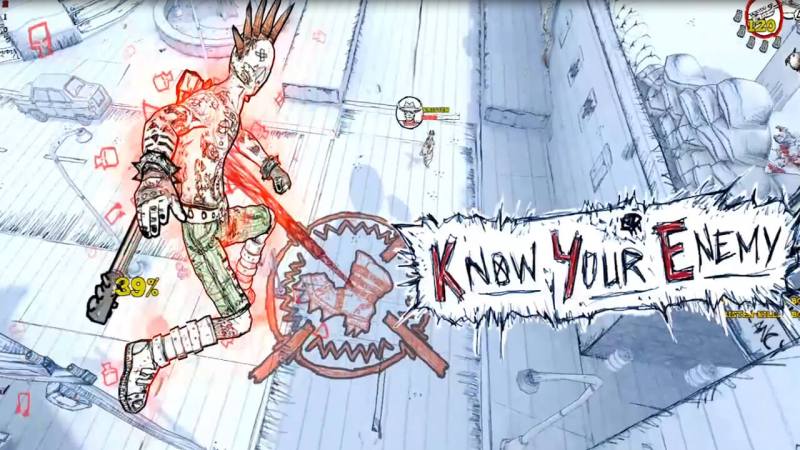 With each character, you can go into a shooting gallery if you want to learn how to play it. One character can send out a drone and launch missiles. He’s like the soldier, based on the kid’s brother, who’s gone missing in action in a real war.

The brother character raises the dead soldiers he fought with, to come fight at his side. His nemesis is Ninjaw, the shark character. If she attacks him she’s able to do more damage to him than any other character with a certain attack.

Another character, Diablo Tijuana, has a kneel move that allows her to do more damage when she fires while kneeling. But she can also kneel when Johnny Savage sends out a demon along the ground, and she’ll be able to suck the demon energy into her and get extra hit points.

Jaffe said, “If you’re playing this character and you see she’s on the field, you want to say, ‘Okay, I need to be careful not to use this attack on that player unless I don’t think they’re paying attention.’ While the surface of it, we’re hoping, is very pick-up-and-play, we want to be sure that there’s a lot of depth there. Probably one of the things I’m most proud of is there’s a lot of places for the player to go in terms of learning.”

You can unlock a lot of taunts in the game, more than 100 of them. Jaffe’s favorite is one where the mother gives the boy a bowl of alphabet cereal. The letters form the words, “He left because of you,” a very mean message about why the boy’s father left them. That’s a pretty devastating taunt.

“It’s just so mean, serving the kid alphabet cereal. And this one’s just depressing. This happy puppet, and then he’s crying. There are lots of ways players are able to express themselves in the game. Lots to discover in terms of characters and story,” Jaffe said.

He added, “One of the things that I’m super proud of, but I always worry about — for me there’s so much depth and nuance that it’s going to take people time to realize that it’s there. My hope is that as we show the press what the game is, that’s what they take with them.”

I came out of the preview session thinking that it wasn’t what I expected.