Icewind Dale: Rime of the Frostmaiden is the next Dungeons & Dragons storyline, taking adventurers and Dungeon Masters to the frigid north and one of the most notable locales in all of the Forgotten Realms campaign setting. It arrives September 15.

Wizards of the Coast revealed the new storyline during a press briefing Monday. By all measurements, D&D is bigger than it’s ever been before in its 45-year history. Franchise VP Nathan Stewart confirmed that this is the role-playing game’s best year yet, noting that it’s even more popular internationally than ever before. And earlier this year, StreamElements (a company that measures livestreaming and provides livestreaming products) told GamesBeat that D&D actual play shows had an aggregated 19.5 million hours over Twitch and YouTube in 2019, a 1,142% increase over 2018. With folks at home sheltering in place because of the coronavirus, we’ve seen huge upticks of play on virtual tabletops such as Fantasy Grounds and Roll20.

“It’s about secrets, so I can’t tell you anything,” D&D principal writer Chris Perkins said at the beginning of the briefing, to a round of laughs.

And then he went on to tell us some secrets. Rime of the Frostmaiden takes place in Icewind Dale, and it’s a story about horror and secrets. It takes characters from 1st level to about 12th level. The design team took inspiration from tales such as The Shining and The Thing. This isn’t the first 5th Edition D&D storyline to feature frights — 2016’s Curse of Strahd is a gothic-horror story. D&D’s last published adventure in Icewind Dale was 2013’s Legacy of the Crystal Shard, which was part of the playtest for the 5th Edition.

Rime of the Frostmaiden features Ten-Towns (the group of communities that cluster around three lakes in Icewind Dale and play the role of “civilization” in the Frozen North), the Rehged barbarian tribes on the tundra, and the importance of all these beings (and more) coming together to solve the key mystery. Perkins said over email that this adventure can take place before or after Baldur’s Gate: Descent into Avernus, the current storyline.

“The problem is that winter doesn’t seem to be ending. It’s cold and dark, a cold, dark, frightening place, and someone needs to do something about it, or life as we know it in Icewind Dale will cease to exist,” Perkins said.

Which sounds dandy for the Frostmaiden.

Who is the Frostmaiden? 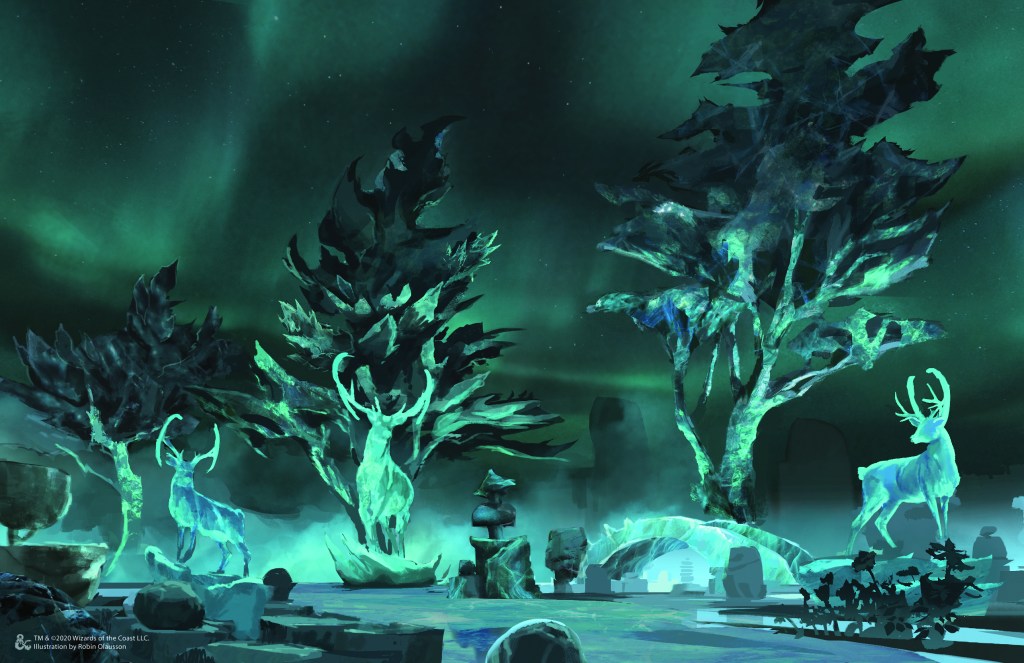 Above: Icewind Dale’s chill may be brutal, but it’s also beautiful.

Though Perkins didn’t mention the being’s name during the presentation, the Frostmaiden is a “very, very powerful entity. Some would call her a god who essentially embodies nature’s wrath and cruelty. She has long been associated with Icewind Dale, and people both fear and revere her.” This sure sounds like Auril, the Forgotten Realms’ deity whose portfolio includes winter — in particular, the cruelty, power, and wrath of cold. And Perkins confirmed this in a followup email.

“After the Sundering helped reset the world of the Forgotten Realms, most of the gods took a step back, leaving mortals to control their own destinies. Auril is a bit different. She has broken away from the others and made her presence felt for reasons that are explained in the adventure,” Perkins said. “She’s a force to be reckoned with, and how the characters deal with her will determine Icewind Dale’s future.”

In her descriptions in previous editions of D&D, Auril has always been noted as a god people pray to more to appease her than through any love for her (though she does have her adherents, such as Lysan from the 2000’s Icewind Dale PC role-playing game). Auril’s most recent mention in 5E is in Waterdeep: Dungeon of the Mad Mage — Halaster can summon her daughter.

These secrets factor into character creation as well. This adds some intrigue, mystery, and maybe even friction for the players, as they can decide to share their secrets or keep them to themselves. They can use print-out cards with these secrets.

“I think the most interesting part [of Rime of the Frostmaiden] is the character secrets,” Perkins said. “Characters can play it one of two ways. They can keep their secret close to their chest and not reveal it to the other players, fostering and breeding paranoia, or they can reveal it anytime they want to, and then wrestle with the consequences of it. That’s left entirely up to the players.”

Secrets fit well into Icewind Dale. Most D&D fans’ first introduction to Icewind Dale is from the 1988 R.A. Salvatore novel The Crystal Shard, and it showed the role secrets play in that region. The Frozen North welcomes those folks running from trouble. Regis of The Companions of the Hall lives in Icewind Dale for this very reason. Many folks there have things to hide, some benign, some terrifying, and the secrets players get at the beginning reflect this. 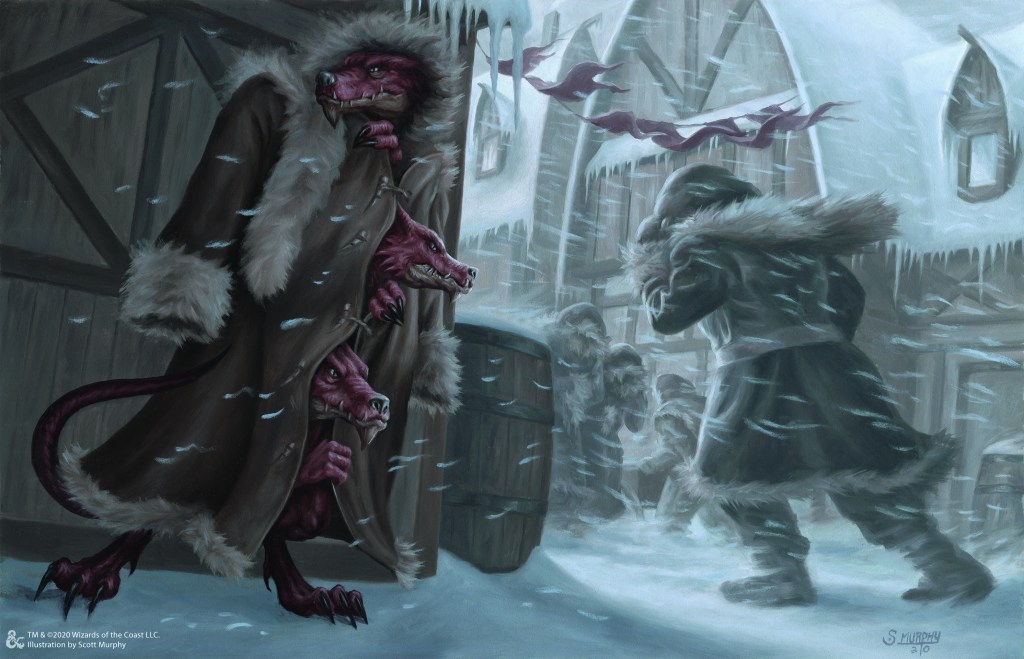 Above: You know the old saying: As subtle as a stack of kobolds in a trenchcoat.

When Perkins started talking about horror and secrets during the presentation, my mind first went to The Thing, the seminal John Carpenter horror flick from 1982. It’s a fitting inspiration for what Perkins and crew laid out.

“The Thing is a story about an isolated group of people dealing with a monster in their midst, and much of the movie takes place at night. If you take that idea and apply it to a D&D campaign, there’s lot of potential there,” he said over email. “When your setting is a cold, dark, isolated place, the horror comes easily. I was struck by the fact that our previous excursions to Icewind Dale didn’t really lean in that direction, so here was a chance to show Icewind Dale in a different light.”

Icewind Dale comes up frequently in D&D. It’s appeared in adventures, video games, and novels. The fandom has a great deal of affection for it. But some folks may be wanting to learn about a new part of the Realms, or at least someplace that doesn’t get as much attention. I asked Wizards why it decided to head back to the Frozen North.

Turns out part of the reason has to do with a video game. 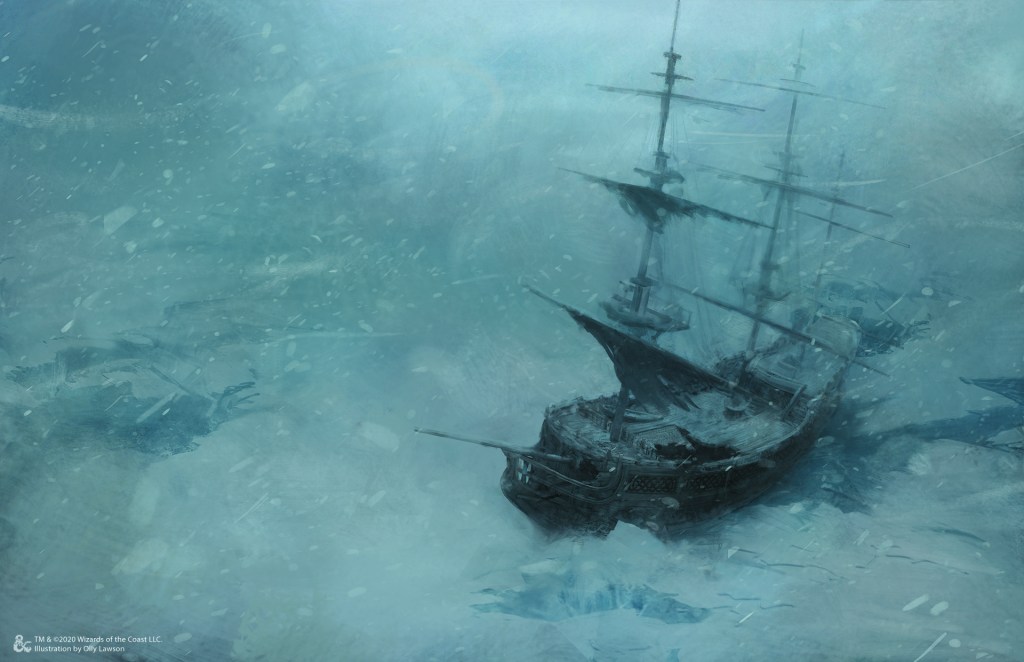 Above: I bet there’s one helluva mystery hiding in the bowels of this icy shipwreck.

“We weren’t planning to return to Icewind Dale so soon, but as Dark Alliance began to crystallize, we realized that there were interesting new stories we could tell in this setting,” Perkins said over email. “We wouldn’t have returned to Icewind Dale if we didn’t have what we thought was an exciting story to tell.”

I also asked how the design team reconciles the need to satisfy those who want to go to places they know and love from video games, board games, and stories with those who want new places to explore.

“Across our whole line of books, we try to give fans what they want,” Perkins said over email. “Certain books are more likely to tap into nostalgia and revisit old settings than others. We also know that we’re gaining tons of new fans who aren’t familiar with our settings. To them, it’s all new.”

We’re seeing more discussion online on how D&D, creators, and players approach humanoids such as orcs and goblins, who have been long portrayed as evil monsters and not people. In a recent Twitter thread, D&D principal rules designer Jeremy Crawford addressed the alignments and treatments of humanoids. He said in the thread: “The NPC appendix of the Monster Manual reflects our intent for all humanoids: they can be any alignment. We are making the rest of our stat blocks reflect that intent going forward.”

I asked Wizards over email if Rime of the Frostmaiden reflects this with orcs (and with drow), as we’ve seen in the most recent sourcebook, Explorer’s Guide to Wildemount.

“Orcs are not prevalent in the adventure, but Rime of the Frostmaiden does feature other creatures that are currently defined in the game as humanoids. Some cleave to a particular alignment, while others defy expectation. We’re of a mind that humanoid creatures, going forward, shouldn’t have prescribed alignments; alignment belongs to each individual. To that end, there’s a new kobold stat block in Rime of the Frostmaiden that identifies the creature as a humanoid of any alignment, which is a departure from the kobolds in the Monster Manual,” he said.

Yesterday, Wizards posted a message about this, reflecting what Perkins shared. “We present orcs and drow in a new light in two of our most recent books, Eberron: Rising from the Last War and Explorer’s Guide to Wildemount. In those books, orcs and drow are just as morally and culturally complex as other peoples. We will continue that approach in future books, portraying all the peoples of D&D in relatable ways and making it clear that they are as free as humans to decide who they are and what they do,” the post reads.