While plenty of music artists have pointed out how streaming music service aren’t very lucrative for them, deadmau5 could be an exception.

Why? Well, it’s because the electronic dance music artist Joel Thomas Zimmerman (a.k.a. deadmau5) launched his own subscription service via a new iOS app yesterday in partnership with music startup Upfront Media. 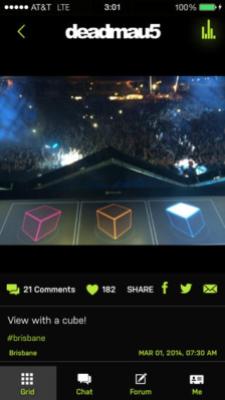 Above: The new iOS app from music artist deadmau5.

The service charges $5 per month (or $45 per year) and offers fans exclusive access to music videos, new music, random thoughts, and more. The subscription service will be complimentary to the deadmau5 Live website launched back in December.

The move makes sense if only because deadmau5 has identified that his very dedicated fan base would be willing to pay for access to the service. Also, the pay-to-play service will likely generate more money than if he attempted to plug all this exclusive content in through traditional distribution channels within the music business.

However, as more of these subscription services pop up, it could end up stealing users away from popular services that also charge monthly fees.

The app is only available on iOS for now, but deadmau5 said yesterday that an Android version is due out in the near future.

okay complainers. we are developing an app for android as well, have been for a while. ios was just easiest for now. work takes time.