For most startups, death is not a question of if, but when.

While that conclusion may seem obvious, the data to support it is pretty hard to come by. Which makes sense: After all, no one — not founders, not venture capital firms — is going to go out of their way to tell the world when they’ve failed. But they will trumpet their victories. It’s the survivorship bias in full effect.

Still, research firm CBI Insights has managed to get some good data on startup death, which happens a lot more than all the funding news would lead you to believe. Here are some of the most interesting findings:

Most die young. Considering how vulnerable most early-stage companies are, it’s not surprising to learn that over half of them die before they raise $1 million, and 70 percent die before raising $5 million. Most dead companies raised $11.3 million on average, with a median of $1.3 million. 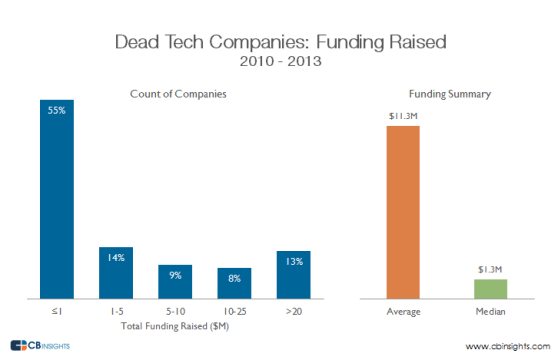 Cash doesn’t (always) buy longevity: But even raising cash won’t save most startups from death. CBI Insights says that, on average, startups will last 20 months after their last founding round (though many will keep lumbering on long after). 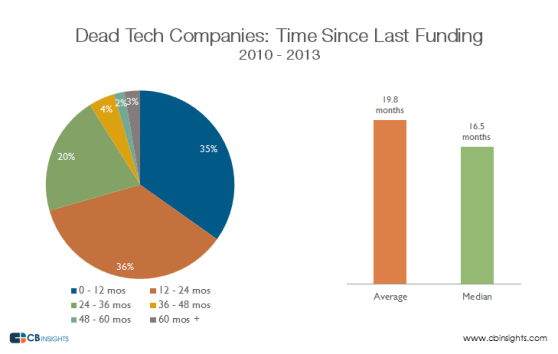 Social is bad news. If you’re trying to launch your own tech company, do yourself a favor and stay out of social, which most of the dead startups focused on. Same goes for marketplace companies (i.e., eBay wannabes) and those dabbling in advertising, sales, and marketing.

What’s especially funny about these numbers is that CB Insights is using them to sell its list of “dying tech companies,” which it’s selling for nearly $7,000. That list, the company says, would be valuable for anyone looking for potential employees or even just products or IP.