While Europe still faces a wide venture capital gap compared to Silicon Valley, the continent is nevertheless making big strides in positioning itself as an attractive hub for scientifically based startups.

This is one of the key takeaways of “State of European Tech Report 2019,” released today at the Slush technology conference in Helsinki, Finland. The report is produced by venture capital firm Atomico, along with Slush and London-based tech law firm Orrick.

These “deep tech” industries span such cutting-edge technologies as quantum computing, computer vision, robotics, nanotech, and blockchain. Across these categories, European startups are on track to raise $8.4 billion in 2019, up from $6.7 billion last year and $3 billion in 2015.

But that success is being propelled by artificial intelligence. Startups pursuing some kind of AI-related product or service account for $4.9 billion of the projected $8.4 billion for 2019.

Within Europe, the U.K. continues to lead the deep tech push, attracting $2.9 billion of this year’s investments and bringing its total in this category to $10 billion since 2015. Following just behind are France and Germany, which together accounted for $2 billion of the deep tech investing this year. 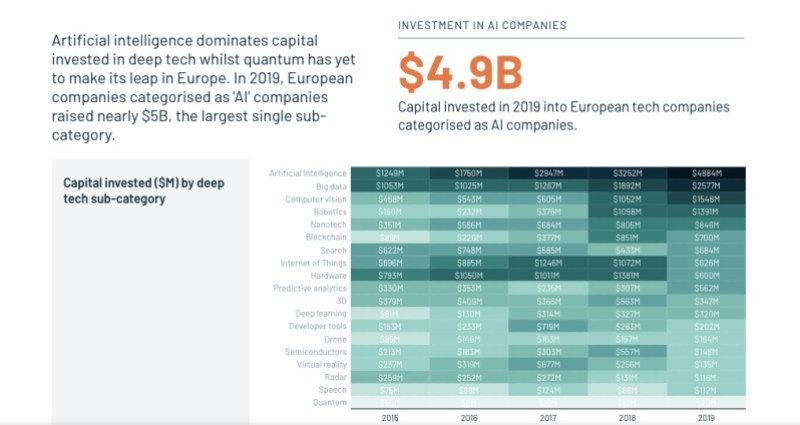 Having fallen far behind Silicon Valley in entrepreneurship and startups, European leaders hope to gain leadership in deep tech by leveraging the continent’s scientific talent. European research institutions certainly have strong reputations in areas like AI, but they have often served as sources of talent for companies outside the region.

The past year has seen some hopeful signals, however. France’s aggressive push to develop its AI ecosystem seems to be paying dividends: The number of AI-related French startups has grown to 432 from 312 last year and 180 back in 2016, according to a report by global consulting firm Roland Berger and France Digitale, an association that represents venture capitalists and entrepreneurs. This growth includes Paris-based Meero, which recently raised $230 million in venture capital for its AI-driven photography platform, pushing the company past a valuation of $1 billion.

Despite these impressive numbers, Europe still has a big hill to climb against China and the U.S. in areas like AI. According to the National Venture Capital Association, 965 AI-related companies in the U.S. raised $13.5 billion in venture capital through the first nine months of this year. That puts the sector on pace to surpass the 1,281 companies that raised $16.8 billion in 2018.

Beyond AI, Europe is also hoping to establish a beachhead in quantum computing. For the moment, this remains at the bottom of the deep tech category in Europe.

The Slush report notes that quantum companies have raised more than $600 million globally, a figure that probably doesn’t factor in a fair number of companies in stealth mode but that includes a projected $222 million for 2019.

But at the moment quantum offers Europe reason for optimism. While 32% of 2019 quantum funding went to U.S. and Canadian startups, European companies raised 58%, compared to only 5% for companies in Asia. 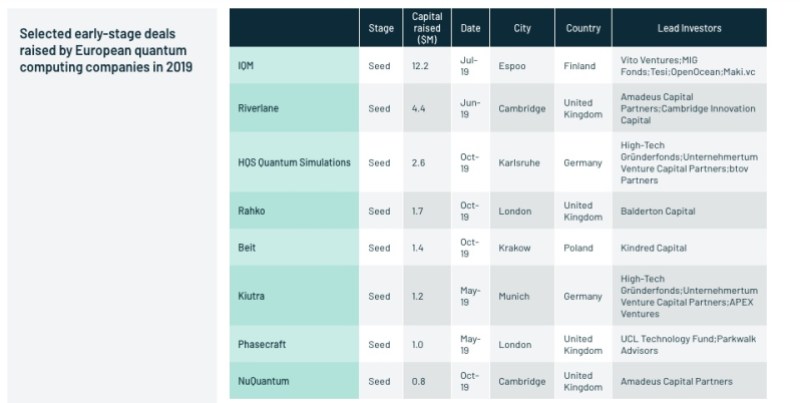 The report credits university research programs in Bristol, Oxford, and Innsbruck for generating advances that have led to promising startups. That’s just the kind of dynamic Europe is betting can help it become a leader in the next generation of critical technologies.