Delivery Agent, a company that lets you purchase products you see on your favorite TV shows, has won a major deal with Viacom and raised $18.5M in a third round of funding.

If you like the jeans that Meredith was wearing in the latest episode of Grey’s Anatomy, you can go to Delivery Agent and buy them immediately. It’s the latest way media companies are seeking to use new interactive technologies to squeeze value from product placements in movies, television shows and now – they hope – online videos. The Viacom deal gives Delivery Agent, of San Francisco, four years of exclusive access to the product placement data from Viacom’s MTV, VH1, CMT, and Logo networks.

The financing round was led by Bessemer Venture Partners and included WorldView Technology Partners and Cardinal Venture Capital. All three had participated in Delivery Agent’s previous $11.5M round. Total invested to date is $35M.

Delivery Agent’s service helps TV or movie producers create an index of products appearing in their movies and shows. The index then becomes accessible on Delivery Agent’s retail site, SeenOn.

You can find and buy practically everything any major character wore on any episode this season on a list of shows from NBC, ABC, E!, Bravo, and others. To buy Meredith’s jeans, for example, you go to SeenOn.com and select ABC and Grey’s Anatomy from a list of networks and their shows. You then can browse by character (Meredith) and episode (“Desire”), and select the jeans from the displayed results (see screen shot below).

The Viacom endorsement gives Delivery Agent a stamp of credibility as it competes against Entertainment Media Works, which raised $4M earlier this year, and operates StarStyle.com, a direct competitor to SeenOn.

Delivery Agent also wants to sell you this stuff at the moment you see it. To do this, Delivery Agent has developed a proprietary video player that synchronously highlights products as they appear on the screen.

To get a taste of this, take a look at this “Shopisode” trailer for Jackass 2. As the video plays, product advertisements pop up on the right hand side. The ads show the product, its name and its brand logo. In the course of the eighty second trailer, eleven products pop up, ranging from Snapple to Speedo. For now, this functionality is only available in Delivery Agent’s Shopisode video player, but the company foresees a future in which any major network or movie studio will be able to plug-in and make their online videos “shoppable.”

If this sounds terrifying, you might have to get used to it – or just go without watching commercial video on the web. Most people are aware that when they watch 24 and see Macintosh computers throughout C.T.U., it’s likely that Apple has paid for this experience. With technology like the Shopisode player at their disposal, it becomes plausible for advertisers and content producers to place products in every nook they can find.

Delivery Agent will first target “hardcore consumers” who they think will watch a show once for the content and a second time to shop for the products they saw. For this to take off, however, video content producers will have to train their audiences to accept a different breed of advertising that is intrusive in a whole new way. But with these producers fed up with the commercial-bypassing power of DVR and the advertising market scrambling to find some brilliant way to monetize online video, Delivery Agent may offer one method for the two parties to align. 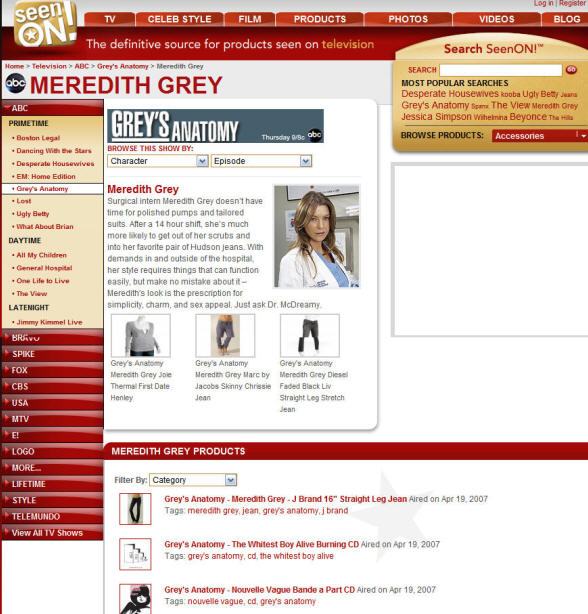