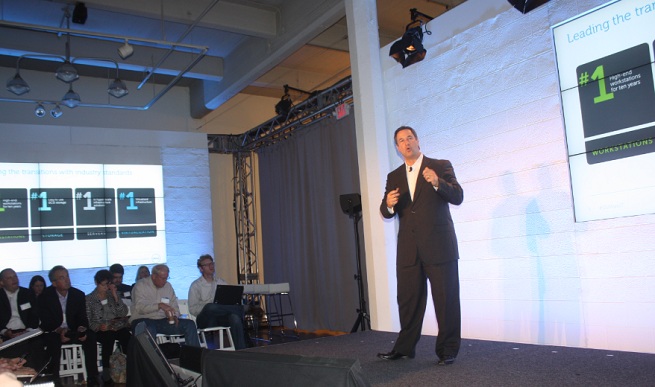 Dell revealed a big component of its enterprise strategy today, saying it will offer an “active systems infrastructure” that could make enterprise computing more efficient, flexible, and affordable.

The strategy addresses a significant problem of the Internet era: big companies have to deploy new web services and data centers faster than ever. They must build racks and racks of computer server systems, going from zero to 60 miles per hour in a short time. This is a major issue for companies.

Enterprises have to be more agile, rock solid, and streamlined than ever before, said Marius Haas, (pictured), president of Dell Enterprise Systems. And they need a computing infrastructure that enables them to do that.

Dell’s Active Systems Infrastructure is a cookie-cutter platform for enterprises to adopt and get new data center servers up and running in a short time, Haas said, speaking at an event in San Francisco.

In an attempt to make servers more efficient, Dell also revealed a new tiered architecture for storing data in memory in servers. The advance will deliver five times to ten times better memory performance in servers.

Dell has invested in multiple acquisitions and spent billions of dollars to get to this point, said Dario Zamarian, a vice president and general manager at Dell.

A key part of the infrastructure is new server hardware, including the Active System 800, a server rack that Dell says takes 75 percent fewer steps from “power on to production.”

Dell also has a new input-output system aggregator to make sure data feeds into the servers at a higher speed, allowing 2.3 times more computers per rack. The system uses the latest Intel-based hardware that allows for 45 percent better system performance per watt.

The Active Infrastructure family of products and services enables virtual desktop infrastructure, private clouds, and enterprise applications. That means that enterprises will be able to let employees access secure enterprise apps however they want, and the data will be backed up to a private cloud-based data center that protects it from accidental loss.

The challenge is to make a modern data center “scale,” or grow with the ebb and flow of demand from users.

Haas said the active system infrastructure initiative is a critical part of the company’s expansion into the $110 billion market for business computing. In the second quarter, Dell’s server business grew 8 percent, networking grew 39 percent, and storage grew 6 percent. That happened while other big computer companies lost market share. Haas said the cloud business market will be a $110 billion opportunity in 2015.

Dante Orsini, the senior vice president of business development at cloud company iLand, said his company runs seven major data centers and it has had to adapt to the rapid adoption of cloud computing. It had to change the way that it deployed data center infrastructure, mainly by buying ahead of what it needed. It also took a huge amount of talent to deploy each data center.

“There’s a lot of complexity going on,” Orsini said.

With Dell’s new technology, iLand believes it will be able to deploy data centers five times faster and with a lot more self-service than in the past.

“And every time we deploy, it will be done right and precisely,” he said.