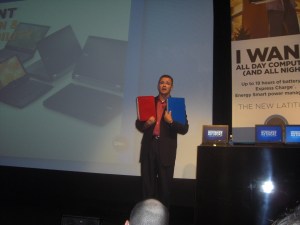 Dell could really use a comeback. It has lost its luster in computing to the likes of Apple and Hewlett-Packard. So it struck back today with 10 new laptops, most of them new versions of its Latitude business laptops with as many as 19 hours of battery life. (OK, more like 10 hours of battery life; see below.)

The new computers use Intel’s new Centrino 2 chip sets which introduce built-in WiMax, a high-speed wireless networking technology that promises much wider ranges for connectivity compared with Wi-Fi. Jeff Clarke, senior vice president of Dell’s business group, said at a press conference in San Francisco that Dell spent two years designing the laptops and went through more than 3,200 prototypes. It used a kind of crowdsourcing for its design, soliciting ideas through its Ideastorm web site and working with more than 4,000 customers to design it.

Welcome to the Web 2.0 era of computer design. The laptops are aimed at a class of users dubbed “digital nomads,” who want to be connected anywhere they go. The company even started a blog site, digitalnomads.com, to target those users.

The new laptops include seven Latitude business laptops and three Dell Precision workstation laptops. The laptops actually have 9 hours and 45 minutes of battery life and an extra battery, dubbed a “battery slice,” that can be plugged in at the same time to deliver nine more hours. But the battery slice costs extra.

The Latitudes range from a 2.2 “ultramobile” version with a 13-inch screen to high-end laptops with bigger screens. All come with a backlit keyboard to see it in the dark. Other features include a magnesium alloy case, a built-in webcam and microphone, a lock-down system that protects a hard drive if the laptop is dropped, and the ability to track down or disable a laptop if it is stolen. It also has fingerprint readers and security features such as the “control vault” processor and memory technology that stores your identity and credentials on protected hardware. On the smallest ultramobile laptops, Dell will offer something new for a business laptop: color choices such as pink, red, blue and black. Dell is including global positioning system (GPS) capability as an option for the laptops.

Later this year, the company will also have the ability to boot to a virtual compartment, using hardware already built into some of the models. This gives it the ability to get on the Internet instantly or access your email immediately without waiting to boot the complete Windows operating system. Clarke said it will be available as a software upgrade before the end of the year. The prices range from $800 to $1,400; those are starting points for the various models of Latitudes.

I’m not sure this is going to do it for Dell. It’s starting to look like the differentiation in this space is based on the tiniest of differences: my colors are better than yours; I can figure out how to deliver more battery life than the other guy using similar components; I can protect a dropped or stolen laptop better. You get the point.

HP launched its own series of nifty machines for the back-to-school season last month. The HP machines also had good designs, similar features, but didn’t hit the same battery life targets. Then again, HP hasn’t yet described its Centrino 2 machines. The Centrino 2 chip sets from Intel were originally due more than a month ago but were delayed. Still, Dell has given Apple, HP, Toshiba and Lenovo a target to strike at.