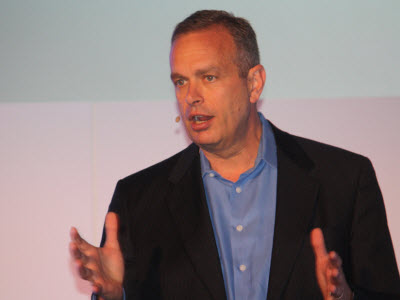 Dell said it is starting a big push to provide cloud services for medium and big enterprises, starting with the launch of a set of new servers for data centers and software to manage them.

Fresh from Dell’s $3.9 billion acquisition of service-focused Perot Systems, company executives said at a press conference in San Francisco today that Dell will create a foundation for cloud services targeted at businesses with up to 5,000 employees. Some 80 percent of companies this size are looking to make their virtual infrastructure more flexible so they can adapt as demand changes.

Dell executives brought up an example of an insurance company responding to a hail storm. Their field adjusters have to file reports from the field via mobile phones. The call center volume explodes. And the load on the company’s data center spikes. The whole IT infrastructure will fail unless it is built to withstand these spikes in demand.

These kinds of companies are only beginning to benefit from cloud services, which allow them to tap into huge pools of computing power as needed, like when demand expands in an unexpected way. The companies need that with the explosion of data from the web; IDC estimates that companies store 500 billion gigabytes of data today, a figure that will double every 18 months.

Faced with a double squeeze from the recession and growing complexity, data center operators need help with the automation of their computing infrastructure, said Steve Schuckenbrock (pictured), president of Dell’s large enterprise division. Along those lines, the company’s new Intel-based PowerEdge servers will help customers create automated private clouds, or web-connected data centers that let customers run applications across networks. Those machines will ship next week. Dell is also launching several other server offering to address a variety of customer needs. 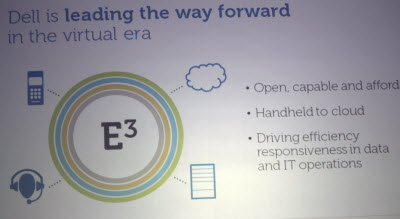 “We have to handle everything from handhelds to the cloud,” said Schuckenbrock.

The solution is a combination of Dell’s hardware for servers and networking, as well as software from partners such as Oracle and SAP, and help from the 41,000 Dell service professionals in implementing solutions. In positioning itself this way, Dell is trying to compete head-on with rivals such as IBM and Hewlett-Packard.

The problem with a lot of business computing infrastructure today is that it has been cobbled together over years and is now hopelessly complex. Dell says it’s trying to simplify data centers with better management software and more efficient servers that replace lots of older servers with just one. The latest server chips from Intel are critical to that.

Some of the companies Dell has been working with over the past three years are Facebook, Ask.com, and Microsoft on its Windows Azure cloud computing project. Dell’s research and development budget is $600 million, up 50 percent from a year ago. Much of that is dedicated toward making data centers more efficient.