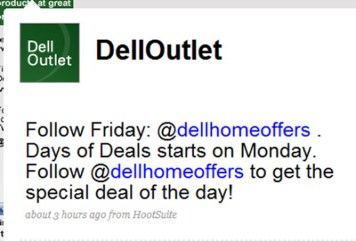 Dell has 34 Twitter accounts, some of which post links to special offers. The company claims 600,000 followers. Once you know these numbers, it doesn’t seem crazy that Dell racked up $3 million in sales through Twitter so far. More than a million of those dollars came in within the past 6 months.

Three million is nothing to Dell, which posted $12.3 billion in revenue during Q1 of 2009.

Certainly one of the ways Twitter can begin to think of itself as a money-making operation is to facilitate a lot of these things, build it as part of the infrastructure. So if you’re a company, you can pay Twitter a certain amount of money and they can directly distribute coupons on your behalf, or clear transactions.

Most of the sales have come through the Dell Outlet account, which tweets only 6 to 10 times per week. Most Twitterati would think that too low a frequency. Why would anyone follow you? That line of thinking leads to a good question: If Dell can make $3 million by tweeting a few times per week, what would happen if the company tweeted its specials a few times per day? Think how little it would cost to put one employee on the task. Hey, I’d do it. Just saying.