Dell‘s largest outside shareholder is gearing up for a fight against the company’s plans to go private.

Southeastern Asset Management, a Memphis-based firm, said in a regulatory filing today that it plans to fight the $24.4 billion sale to Michael Dell and private equity firm Silver Lake Partners. The firm owns approximately 8.5 percent of the company’s shares, including options.

In a letter addressed to Dell’s board of directors, the firm makes the case that the buyout is too low, which is essentially robbing shareholders. The authors urge the board to explore alternative options, or face a long and protracted fight against the deal.

“Unfortunately, the proposed Silver Lake transaction falls significantly short of that, and instead appears to be an effort to acquire Dell at a substantial discount to intrinsic value at the expense of public shareholders,” the firm said.

The firm makes the case that Dell stock should be valued at up to $24 per share, rather than the $13.65 offer price. The authors point to Dell’s success with the small to medium sized business (SMB) market as a competitive advantage that has not been duly considered. 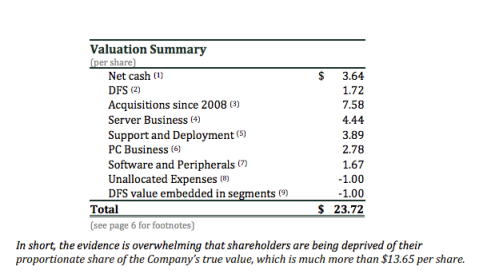 Southeastern put forward alternative moves that would return value to shareholders, including borrowing money to pay out a special dividend or a leveraged buyout to allow for limited trading of shares by public investors.

Southeastern Asset Management is run by Mason Hawkins and Staley Cates, both of whom oversee Southeastern’s Longleaf family of mutual funds. The Longleaf strategy is to basically buy and hold stakes in companies over long periods of time, especially those they believe are trading at discounts.

Related: Read our analysis of Dell’s privatization: a new era for old tech.