There are 78 companies presenting at the DEMO conference this week. We’ll be covering some of the more notable ones in separate posts. 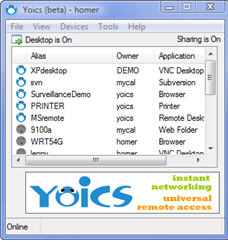 YOICS, a Palo Alto, Calif., company, makes any network-connected device remotely accessible via a Web page. You can grant others access to it too. You can view webcams on your mobile phone, for example. It says it makes such access “as easy as instant messaging.” Any folder or service on your computer can become a server accessible from anywhere on the Internet. Yoics is free.

ZODIAC INTERACTIVE, of Valley Stream, New York, is launching Zodigo, a service that allows you to search for content for your mobile phone from existing cable set-top boxes and networks. Zodigo helps you find games, ringstones, podcasts, manga and more recommended by like-minded people.

ACESIS of Mountain View, Calif., hopes to make adopting electronic medical-record systems as painless as possible for physicians and small medical groups. The company’s avowedly flexible and adaptive system involves digital forms that aim to be faster and more reliable than paper charts, reconfigure themselves to fit a patient’s specific medical situation and can be extended or revised on the fly. The company is targeting smaller doctors’ offices that lack dedicated IT staff, and which as a result have been slow to adopt electronic-record keeping that can cut down on medical errors and improve coordination in patient care.

HEALTHPRICER, of Vancouver, aims to be the premiere comparison-shopping engine for health products — everything from prescription drugs and dietary supplements to contact lenses, cold medicine and face washes. The Vancouver startup gets commissions from merchants it features, but keeps the service free for users, and emphasizes that it offers no sponsored links or any other commercially motivated slant that might take away from its goal of making it easy to find the cheapest and best healthcare goods possible.

YOUCHOOSE, a Thornton, PA-based company, offers a universal commenting system. First, a blog chooses to embed the YouChoose widget to serve as the commenting section on all of its blog posts. Here’s the twist: Its widget come pre-set about specific topics, so blogs sharing interest in the widget topics can choose accordingly. Then, comments on any one post on one blog appear on all blogs that use the widget. It hasn’t launched yet, and we’ve yet to get a real look. 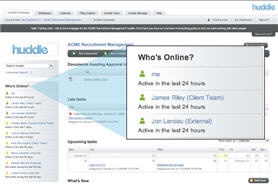 HUDDLE, based in London, offers the standard set of features that one sees in online project management software, such as task lists for groups, ways of assigning responsibilities to people, etc. It is most interesting because it is both a free-standing site and a Facebook application. The latter shows you a task list, where you can see the people in Facebook that you’re working with, as well as links to documents that you’re working on together, such as Word or Excel documents. (See our original coverage here.)

ASANKYA and BITGRAVITY — These are both data delivery companies. BitGravity, of Burlingame, Calif., which we’ve written about before, builds broadcast quality video delivery services. At DEMO, it launches BG LiveBroadcast, a flash-based streaming service. Asankya, of Atlanta, Georgia, meanwhile, says it wants to be the next Akamai. It provides high-quality real-time and two-way traffic over IP networks. The company’s technology, Packet Level Multi Pathing (PLMP) assesses the network in real time and directs each packet to avoid congestion that may impede streaming quality. Asankya works with ISPs. Its product is called Hypermesh, and says has developed new protocols.

SQUIDCAST, of San Francisco, allows users to send large media files including high-definition video and high-resolution photos for free. The company says it’s lowered infrastructure costs without compromising quality through its “Collaborative Relay Network,” which takes advantage of users’ storage and bandwidth to create a distribution network. A beta is launching simultaneously in the United States and Japan. 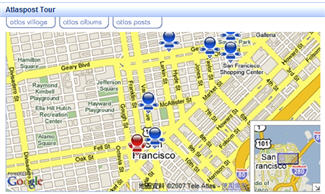 ATLASPOST is a Taiwanese company that lets users network on a global map. There’s nothing extraordinary about this company. Users can personalize their own neighborhoods on a standard Google map, placing images of buildings, animals or anything else they want — and then see who else is active doing similar things in their neighborhood. It offers map-based blogging and photo tagging.

HUBDUB, of Scotland, wants to get large numbers of users vote on the likelihood of certain events, hoping that their votes will, in sum, be predictive. You submit a question and other users vote on its likelihood. Example question: “After the emergency [interest rate] cut, will another cut be made to the Federal Funds rate at the scheduled meeting Jan 29/30?” The site includes links to relevant, timely news articles beneath the question, such as links to news stories about the Fed’s two percent rate last week. Problem: There are many, many examples of these so-called prediction markets already in practice. Wikipedia lists about a dozen. Most recently, there was Google’s prediction market for employees, designed to forecast things like product launch dates and new office openings.

STANDOUT JOBS, of Montreal, Canada, is launching Reception, a new job recruiting Web site where companies can use social networking tools to create an “employer brand.” Features include a career site that can be customized with polls, Q&As and comments; video capabilities; and metrics to evaluate the efficacy of job boards. After a free trial, Reception will cost users $149 per month. The site is launching with more than 20 employers including b5media, Freshbooks and Jangl.

RIBBIT, of Mountain View, has a platform that takes does the dirty work for developers who want to integrate voice into their applications, in exchange for a small cut of the profit. The platform is new, but a few useful-looking apps are already on it. Amphibian, lets developers create consumer applications to tie in your mobile phone to your internet experience, and Ribbit for Salesforce, adds voicemail, memos and calling to Salesforce.

SCENECASTER, of Ontario, Canada, is a startup whose Facebook application we briefly mentioned last year. The company allows users to build their own three-dimensional virtual room within social networks, populated with items like couches and carpets. It’s now expanding to other sites, including Flickr, and adding to its capabilities, allowing users to link in media or web pages through 3D objects. A neat idea, although a look at the lengthy list of complaints on its Facebook app page shows that the company still has some work to do towards providing a simple enough experience to users.

SKYFIRE, of Mountain View, says it can provide a full web-browsing experience on any smartphone — with no need for .mobi versions of webpages, and no processing issues or hiccups. It wants to let you watch videos, listen to music, or do anything else you can do on a computer. Initial reports suggest it actually works as promised, which is more than can be said for other mobile web-browsing applications. 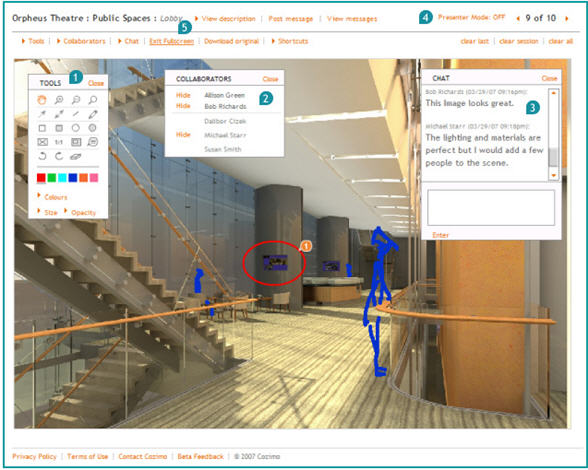