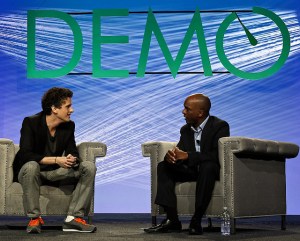 Updated: We’ve added a video interview with Levie below.

For many entrepreneurs, college dorms are the new garages.

Aaron Levie is the poster boy for that movement. He’s the he co-founder and CEO of Box.net, a cloud content management company that got started in Levie’s University of Southern California dorm room in 2005. He had wanted to go into films, but was rejected from the program. Instead, he turned his attention to solving a problem. Now, the solution to that problem has snowballed into highly successful company with over 200 employees.

The problem he tackled: “How do you share information between the people you want to work with?” says Levie, speaking onstage at Demo Fall 2011 with CNBC technology correspondent John Fortt. “This [idea] is pre web 2.0 explosion. There were a bunch of zombie companies from dot.com, but no one was really doing anything about the problem.”

Levie is energetic, dynamic and clearly not afraid of emailing strangers.

In search of funding for his new company, Levie sent an email to billionaire investor Mark Cuban, who he didn’t know, and Cuban got back to him, and invested in the idea. The company raised an angel round from Cuban, “a few $100,000”. The check arrived in his dorm’s mailbox.

“How do I get out of here as soon as possible,” Levie then asked himself, regarding school. The money was burning a hole in his pocket, and the idea buying in his brain. “We had to give it a shot. And that’s what we did.”

Today Box.net has 250 employees, and competes with companies like Microsoft with the collaboration software SharePoint.

“This is a very competitive space,” Levie said. “We’ve been doing this for six years. We’ve seen waves in this industry.”

And there are waves within the company. Levie talked about the evolution of a CEO, and how he manages to grow as a leader.

“We realized there was a tremendous amount we didn’t know,” says Levie. “We looked around the ecosystem and there were way better people out there… We want to be surrounded by investors who would be very helpful for us.”

Perhaps the best piece of advice Levie says to scale and grow the company, and awareness of the company, he would email everyone. His constant emails helped the product go viral through blogs.

Levie says he regrets not having gotten to market faster, and believes he could have gotten to more people had that been accomplished.  Another regret: If he’d started the company today, it might have looked a lot different.

“We should have added a daily deal component,” he jokes. “It would have been like enterprise software with a file of the day or something. There would have been an ad every third file.”