Delphix is one of 70 companies chosen by VentureBeat to launch at the DEMO Fall 2010 event taking place this week in Silicon Valley. After our selection, the companies pay a fee to present. Our coverage of them remains objective.

Database management is a nightmare for most organizations, and that’s something that Palo Alto, Calif.-based Delphix aims to fix with the Delphix Server database virtualization software its unveiling today at the DEMO conference in Silicon Valley.

Its technology shrinks storage requirements for non-production databases by a factor of ten, minimizes database refresh times, and reduces setup time from days to minutes, the company says.

In short, it’s vastly efficient compared to the traditional database-management model, which is notoriously complex, redundant, and expensive. According to Oracle, providers of one of the most popular traditional database solutions, most customers create seven copies of every production database for development, QA, testing, pilots, training, staging, and operational reporting.

Instead of creating several database copies, users can use Delphix Server to create a single virtual environment from which they can instantly create as many virtual databases as necessary.

In addition to the above benefits, Delphix’s software also lets users instantly recover data when necessary, thanks to the company’s TimeFlow technology which keeps track of database changes, and can enhance existing backup solutions, allowing users to launch archived databases in minutes. 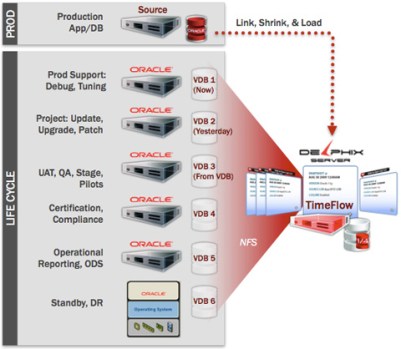 Delphix founder and CEO Jedidiah Yueh first noticed the need for a database virtualization solution when he dealt with customers for his previous company, Avamar, which focused on data deduplication (removing duplicate files to reduce storage load).

His customers found that server virtualization, which allowed them to virtualize individual servers instead of relying on physical hardware, allowed them to be much more flexible about their computing requirements, but traditional database management left them stymied. He realized that offering the database equivalent of server virtualization would be something many organizations would appreciate. Delphix’s customers now include some of the world’s largest companies.

Founded in June 2008, Delphix currently has 35 employees, and has raised a total of $20 million over two rounds of funding from Greylock Partners and Lightspeed Venture Partners.