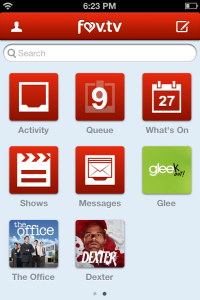 Just in time for the Fall television lineup, today Fav.Tv launched an interactive television guide that lets people discuss, follow and get notified about their favorite shows.

I’m not a big TV watcher, so I’m not the best test case for the service, but my TV-obsessed co-worker Tom Cheredar checked it out and says he added almost 30 shows to his profile and would have added more if they were listed.

Palo Alto-based Fav.Tv uses data aggregation technology to fetch content from all over the internet and sort it by show. This content includes TV guide information, news about TV shows, episode trailers and new show promotions as well as metadata about TV shows like links to IMDB pages, Twitter accounts and Network sites. TV fans only see what they want to see with a user-friendly interface.

Tom and I play around with the beta version of Fav.Tv and decided that if you only follow a handful of shows, or one (as in my case — 30 Rock), it isn’t that helpful. This is for heavy users.

Tom loved the idea that a service can track everything he’s currently watching, then allow him to rate it and take it off his list of things to watch. “I tend to watch tons of different shows on a variety of different platforms (Comcast, Hulu, Netflix, etc.) and it gets difficult to keep up with what I’ve watched and when I watched it. To my knowledge, Fav.tv is the only service that does this,” he said.

He also really likes the news feed element and said it could easily become something that rivals the ‘episode’ queue if Fav.Tv plays it right.

Tom did complain that there aren’t direct links to where the shows are officially being played and that some of his favorite shows, like Dr. Who, aren’t currently available to follow.

“We don’t think people want to interact with friends while watching TV,” says Fav.Tv founder and CEO Saverio Mondelli. “We are very against that. Our approach is different. We want to make TV information more available to people and then provide a place for them to voice their opinions after the show is over. Fav.Tv is about the before and after parts of TV. The after part of TV is actually very social. Think about your typical water cooler conversation with a co-worker. Fav.tv provides a venue for those conversations on the internet.”

Mondelli adds that the most popular shows followed on Fav.Tv are Dexter, How I Met Your Mother, Entourage and True Blood.

Founded in 2011, Fav.Tv currently has six employees and they are bootstrapping. They have quite a bit of competition: TV.com, Miso, GetGlue, IntoNow, Philo and TunerFish. Fav.Tv competes by offering a social element and information. Unlike Tiwtter and Facebook, commentary is organized by show and is in one central spot.

“We’ve had a teaser website up with the ability to submit requests for invites,” says Mondelli. “We’ve received thousands of requests over the past year. Today we have about 1,300 users and that is only because we’ve stopped inviting people who have requested invites.”

When it comes to making Fav.Tv profitable, Mondelli says he is exploring partnership options.

“The data that users generate as they use Fav.Tv allows us to understand TV better,” says Mondelli. “It tells us what users like to see in their content, it tells us where they are getting their content, and it tells us how engaged they are with a particular show. This all rolls into a sort of ‘business intelligence’ for TV networks, [which] are constantly battling for the next new prime time success. We hope to form mutual partnerships that provide our users with a better TV experience while giving networks perfect information to make better decisions about their content.”

Fav.tv is one of 80 companies chosen by VentureBeat to launch at the DEMO Fall 2011 event taking place this week in Silicon Valley. After our selection, the companies pay a fee to present. Our coverage of them remains objective.