Footfeed is one of 70 companies chosen by VentureBeat to launch at the DEMO Fall 2010 event taking place this week in Silicon Valley. After our selection, the companies pay a fee to present. Our coverage of them remains objective.

Los Angeles, Calif.-based Footfeed has a solution for our collective check-in woes: Its service lets users check in to multiple location-based services at once, and allows businesses to create a multi-check-in network of their own or integrate Footfeed’s service into an existing product. Footfeed supports check-ins to Foursquare, Brightkite, Gowalla, Facebook, Twitter, and Google Latitude.

The company says it has built an advanced location-mapping system that can send locations to multiple check-in services with a single user ID. As part of the 2.0 version of its software, which the company is exclusively showing at the DEMO Fall 2010 conference in Silicon Valley, Footfeed is launching a crowdsourced system called “select-and-match” which will let users manually match locations upon check-in. The new version will also be able to aggregate deals and tips from multiple services. 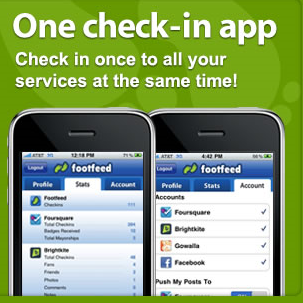 Check.in, another multiple check-in service, is Footfeed’s only major competitor thus far. It’s developed by Brightkite, itself a well-known check-in service. Footfeed believes it has an advantage in that Check.in is a Web-only application and doesn’t offer businesses the ability to integrate multi-check-in functionality.

The company has seen over 2,000 users sign up for its service after it began beta testing in June, and those users collectively check in an average of 1,200 times a day. Footfeed recently signed a deal with Renaissance Hotels to integrate its multi-check-in service into an upcoming app, and it says its in talks with “over a dozen major brands” for future deals.

Footfeed is bootstrapped by its founders, and remains entirely self-funded so far. It’s currently seeking to raise a seed round of $500,000.