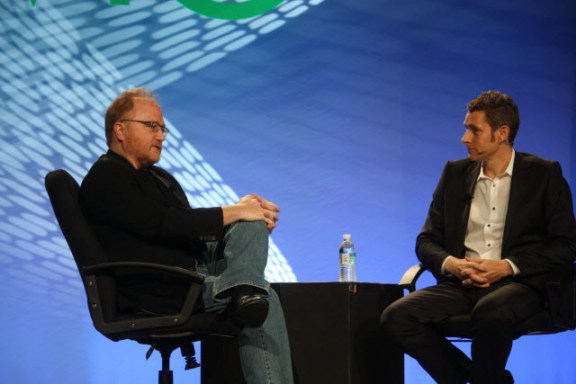 Hewlett-Packard has been on a huge acquisition spree, spending almost $5 billion on companies such as Arcsight, Palm, Fortify and 3Par. It’s difficult to see any rhyme or reason to the collection of new assets. But Phil McKinney, vice president and chief technology officer for HP’s Personal Systems Group, said today at the DEMO Fall 2010 conference that the aim is to create a one-stop shop for customers to buy complete systems that are already integrated and working together.

“You integrate them and take the burden off the customers of doing that,” he said in a conversation with VentureBeat Editor-in-Chief and DEMO emcee Matt Marshall. “I understand what it takes to take disparate parts and stitch them together. It’s hard. We can reduce the total cost in their spend. That’s value for everyone.”

HP also isn’t just acquiring companies so that they can stand by themselves and duplicate the work of other parts of HP. As HP learned as far back as its merger with Compaq, the company can choose to “adopt and go.” That means it looks at similar products, decides to back one of them, and then allows everyone to get behind that one product.

Of course, HP isn’t quite doing that with its recent Palm acqusition. The company will launch a Windows 7 version of its upcoming Slate computer (a challenger to the iPad) before the end of this year, as well as a version that will run the WebOS operating system from Palm in the early part of 2011. McKinney said that a lot of enterprises like the idea of buying a tablet computer with Windows capability, so that it will integrate more easily with the rest of their information technology. In particular, retail, healthcare and financial services companies are expected to embrace the Windows 7 Slate, McKinney said.

On the other hand, users are looking forward to the Palm version of the tablet because it is an elegant operating system. McKinney said that HP has significantly expanded the staff at Palm’s headquarters in Sunnyvale, Calif., under the leadership of Palm CEO Jon Rubinstein. Apple is far ahead with the iPad, but McKinney said HP is moving as fast as it can. Once it launches, it will have a huge reach, since HP sells in 171 countries and has products in more than 100,000 retailers.

“We have scale in size, supply chain, procurement, and distribution,” McKinney said. “We are seeing a shift in the market where customers are picking the best two or three products they want to carry.”

As for research and development budgets at HP, McKinney said he was happy with the funding and the payoff from R&D. He said that Wall Street’s measure of using R&D expenditures as a percentage of revenue as a benchmark for a company’s commitment to R&D is a “bogus” benchmark. HP is such a large company in revenues, he said, that its percentage spending looks small even though its absolute dollars dwarf many other companies. He said that the past five years of improving financial results have shown that R&D at HP is paying off, as “inventing a better mousetrap” allows you to charge a premium for products and improve your bottom line.

McKinney said that HP is working on phones, Slates, and printers that will run the WebOS. You’ll be able to instantly print things like coupons with very little effort once those come out. As for futuristic cool stuff, HP is also working on things like huge displays that let people see an entire basketball court at the same time.