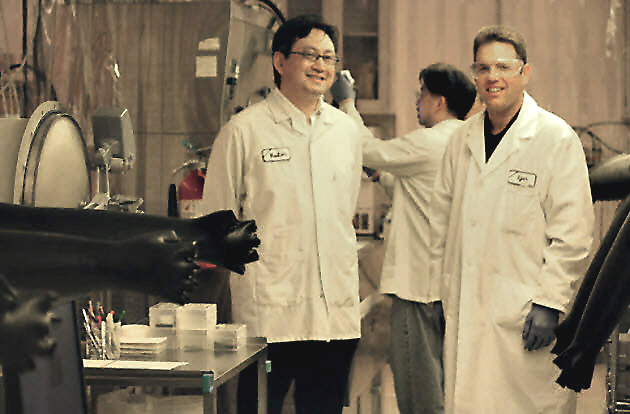 InVisage is one of 65 companies chosen by VentureBeat to launch at the DEMO Spring 2010 event taking place this week. These companies do pay a fee to present, but our coverage of them remains objective.

QuantumFilm could usher in a new age of high-quality, thin, inexpensive digital cameras and camera films.

Based on a new kind of image sensor technology from chip startup InVisage Technologies, QuantumFilm can deliver mobile phone camera images that are four times sharper than today’s cameras, with twice the dynamic range, or the ability to have both dark and light features in the same picture. 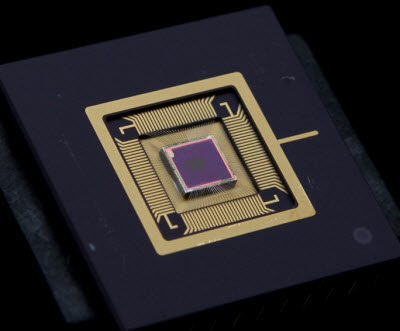 No longer will you have to put up with a bulky camera with a long lens to get good quality pictures. If the iPhone used these chips, it would be able to take 12 megapixel pictures with better quality features, compared to the 3-megapixel pictures it can currently take. With such quality, many consumers might opt for carrying only camera phones.

Unveiled today at DEMO, QuantumFilm uses a new kind of custom-designed material, dubbed a quantum dot, that can replace a typical silicon image sensor. Today’s imaging chips use complementary metal oxide semiconductor (CMOS, a standard process in chip factories). They capture only about 25 percent of the light that hits the surface of the silicon. 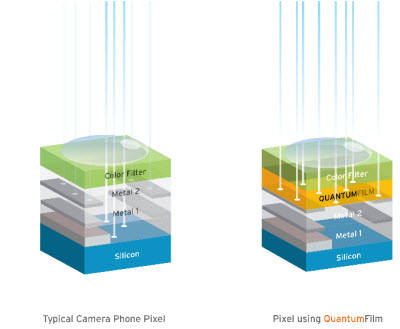 QuantumFilm uses a silicon chip as its base, but it has an extra layer of quantum dot material that is better at absorbing light. The thin layer of film captures about 90 to 95 percent of the light that hits it. That translates into an enormous quality improvement. And since the efficiency of light capture is so much better, the entire system is much cheaper as well. The addition of the extra layer of material is a trivial manufacturing step that doesn’t add much cost. It can be done with typical sputtering tools that are already present in chip factories.

The first samples of QuantumFilm camera chips will be available in the fourth quarter, and products using them will likely launch next year. InVisage developed QuantumFilm based on the research of its chief technology officer, Ted Sargent. He worked on the technology for several years at the University of Toronto. Then he secured the rights to the technology and founded InVisage Technologies in October, 2006.

Some of the ideas in this space come from the solar market, where the makers of solar cells are starting to move away from silicon solar cells because they’re not as efficient at capturing light. The company recruited veterans from the CMOS image sensor market, including chief executive Jess Lee, a former executive at image sensor maker Omnivision.

Lee (pictured at top, left, with Michael Hepp, director of marketing, right) said in an interview that it took about three years to engineer the quantum dot material, which is a byproduct of research into nanotechnology. The material was engineered from the outset to be good at light capture, the essential task of a camera. The material is “tuned” so that, when hit with light, it emits a different color. The quantum dots sit in a suspension and can be splashed onto anything. I visited their lab last week and watched the sputtering machine in action (pictured below; thanks to Clark Thomas for cleaning up the photo). 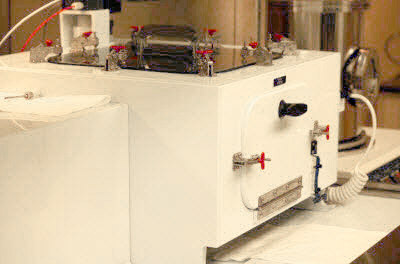 Just nanometers in size (a nanometer is a billionth of a meter), a quantum-dot based material is deposited directly on top of a chip wafer (chips are processed in pizza-size wafers and then sliced into individual chips). QuantumFilm covers 100 percent of each pixel, capturing all light that hits it. The material is applied in liquid form to the top of a spinning disk, then it is annealed, or baked. It is a lot like adding a layer of photoresist to a chip wafer, and it uses the same equipment. The wafers are standard 110-nanometer wafers produced by Taiwan Semiconductor Manufacturing Co., the biggest contract chip manufacturer.

By coming up with a new material, Menlo Park, Calif.-based InVisage may very well be able to upset the conventional wisdom that it is just too expensive to create a new semiconductor startup to compete with giants. InVisage will compete with a number of big chip makers, including Omnivision, Aptina, Samsung and Sony. The irony is that those chip makers created CMOS image sensors that killed off older chips dubbed charge-coupled devices.

Those companies are having a harder and harder time coming up with better image sensors, Lee said, because silicon has hit a technological barrier. Tetsuo Omori, an analyst at Techno Systems Research, estimates that the image sensor companies spend about $1 billion for each new generation of sensor technology, and each time they get a single-digit percentage increase in performance. A four-fold improvement is unheard of, and so Omori thinks QuantumFilm will change the competitive landscape in the image sensor market, which had $5 billion in revenue in 2009.

All cameras could benefit from QuantumFilm, but the biggest benefit will be in camera phones where the demand is greatest for small, high-performance image sensors. Eventually, QuantumFilm could be used in security cameras, car cameras, and military applications such as night-vision goggles.

InVisage has 30 employees and has raised more than $30 million from RockPort Capital, Charles River Ventures, InterWest Partners and OnPoint Technologies. Its technology is protected by 21 patents and patents pending. Lee said the company will likely raise a third round of funding as it moves into mass production next year.