IQ Engines is one of 70 companies chosen by VentureBeat to launch at the DEMO Fall 2010 event taking place this week in Silicon Valley. After our selection, the companies pay a fee to present. Our coverage of them remains objective.

With the wow factor of services like Google Goggles, which lets users search objects in the real world through the built-in cameras of their Android devices, it’s clear that visual searching is more than a mere fad.

At the DEMO conference today, Berkeley, Calif.-based IQ Engines is taking visual searching to the next level with its image recognition engine, which has its roots in neuroscience. Its engine can easily label and identify images, letting users search with images the same way they search with text on standard search engines.

As we wrote previously, the company’s goal is to provide an application programming interface, or API, that will allow all different types of businesses — from online retailers to mobile application makers to photo gallery sites — to provide visual search capabilities.

The visual recognition engine employs three systems: An exact object identification engine, an object classification engine, and a human computation network (crowd sourcing some labeling work). The company says that the engine will improve over time as its used more. 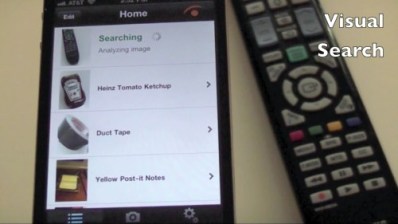 Unlike competitors like Google Goggles, IQ Engine’s visual-search technology can identify and label any legible image — not just images it has already dealt with. Other visual search engines simply return no results if they can’t identify an image. IQ Engines also says it’s the only company to make an open API available so that third-party developers can utilize its image-recognition technology.

IQ Engines says hundreds of developers are using its API to develop applications, most of which are slated for release this fall. The company also released its own iPhone app several months ago, which goes by the name of oMoby.

Founded in 2008, the company landed $1 million in funding in June from angel investors, and combined with National Science and National Institute of Health grants, it has raised a total of $2 million so far. It’s aiming for a second round of funding this winter.