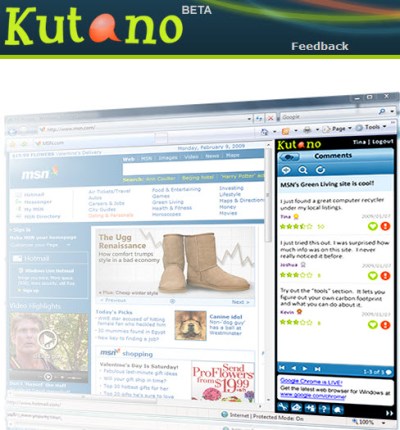 Kutano is yet another company that’s creating an application for the parallel web, which refers to applications that layer a new set of functions on top of the existing web.

The app, presented at DEMO 2009 this week, sits on top of any web site and generates a panel on the side of a web page where users can leave comments.

Anyone else who uses Kutano can visit that page in the future and see your comments. They can thus interact with you. If you leave a comment on, say, a book web site, Kutano sends you an email or a Twitter message notifying you when someone responds to your comment.

Since you’re leaving the comment on Kutano’s software, you’re not actually changing the web site in any way. That means the company that owns the web site can’t take the comment down. Sure, this will result in a lot of spam and inappropriate comments. But Kutano will rely on its users to flag such stuff, and the company will ban abusive users. You can effectively mute people (so you don’t see their comments) you don’t want to hear from. Once you log into Kutano, you can pretty much use it on any web site.

Over time, the company wants to enable connectivity so that a Twitter user can leave a Kutano message on a site, directly from Twitter.

“The intent is to democratize content on the web,” said Tina Gonsalves, vice president of marketing at Kutano.

Kutano is based in Burnaby, Canada. It has raised two rounds of funding from one angel investor and has funding from the Canadian government’s program for high-tech investment. Competitors include Reframe It and WebSpeakup. Another parallel web company is Rocketon, which creates avatars, or virtual characters who can crawl over other web sites and hold live chats with others visiting the sites.