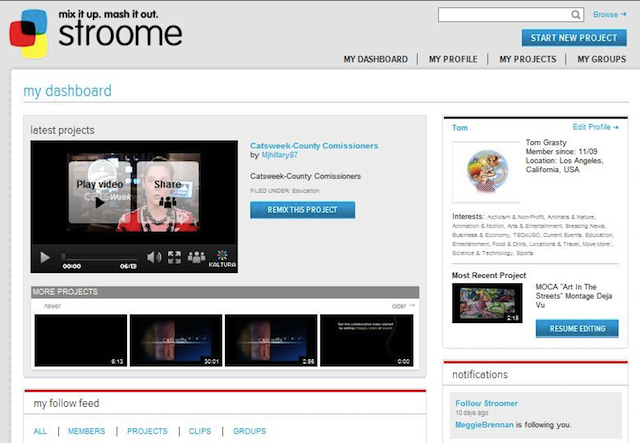 Video editing doesn’t have to be a lonely undertaking. Stoome, a web-based video editing startup, wants to turn the creation and sharing of videos into a truly collaborative and social experience. Today at Demo Fall 2011 in Silicon Valley, Stroome announced that Mozilla has come on board as a new adviser on its open source efforts.

Stroome combines web-based video editing tools with a lively social network of film makers. You can work alone, uploading your own clips and editing them together right there in a browser. But what makes Stroome exciting is its collaboration features.

Colleagues or friends working together on a project in different locations can upload their clips and immediately start slapping together a final masterpiece. You’re not limited to working with people you know — Stroome’s centerpiece is a growing pool of collective content and diverse members. Users upload their own rights-cleared clips to Stroome’s online library and those clips are then available for other members to sample, splice together and include in their own projects. Currently Stroome has a library of thousands of publicly available clips, and active members in 127 countries.

“There’s a pony in there somewhere,” said Scott Weiss of Andreessen Horowitz, a venture capitalist in the crowd who commented on the company’s prospects onstage after Stroome’s demonstration.

The idea for Stroome began when journalist Nonny de la Peña wanted to make a video to go with an article about fish mating calls for the New York Times, but she was thwarted by time and budget limitations. Now the possible uses for the site go far beyond journalists looking for b-roll. Groups of people attending the same event, such as a concert or party, can pool their various clips together on Stroome to create a video with multiple points-of-view. Stoome was used by protesters in Egypt who wanted to share videos from the streets after Facebook and Twitter were shut down.

Founded in 2009 by Tom Grasty and Nonny de la Peña, Stroome has raised $285,000 from the Knight Foundation and from friends and family. Its major competitors are Vlix, JayCut and Creaza. It has four employees and is based in Los Angeles.

Stroome is one of 80 companies chosen by VentureBeat to launch at the DEMO Fall 2011 event taking place this week in Silicon Valley. After our selection, the companies pay a fee to present. Our coverage of them remains objective.There’s still plenty to see at DEMO, and VentureBeat readers can get a special discount on registration for the remainder of the show at demo.com/VBDay.