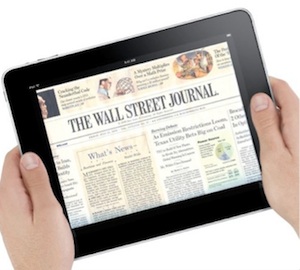 Mediaspectrum is one of 70 companies chosen by VentureBeat to launch at the DEMO Fall 2010 event taking place this week in Silicon Valley. After our selection, the companies pay a fee to present. Our coverage of them remains objective.

There’s a lot of excitement about the opportunity that the iPad and other tablet devices present for the media — but even so, not every publication has found the time or money to build their own app. (Cough cough, VentureBeat.) But a Burlington, Mass. company called Mediaspectrum is announcing a new product today called Adrenalin, which should help newspapers and other publications make the leap.

Jay Cody, Mediaspectrum’s vice president of marketing, acknowledged that an app-building service is nothing new, but he said Mediaspectrum has paid particular attention to both publishers’ and readers’ needs on the iPad. Publishers just set up a special feed with their content, then Adrenalin pushes the content, along with advertising, into the app. Publishers will log into their accounts, track statistics, and add iPad-specific content, like an extra photo gallery. Since users might want to read their iPad even when they don’t have an Internet connection, the apps can store some of of the articles (say, the last day or so — it’s up to the publisher) to be read offline.

As for the advertising, publishers can sell ads themselves, and Mediaspectrum plans to create its own advertising network among Adrenalin apps. Cody said one thing special about Adrenaline is the fact publishers can even sell advertisements through the app itself. So if you own a business and are reading your local newspaper on the iPad, you don’t have to go to a website or call a sales team to place the ad — you just purchase the ad on the iPad and upload your content straight into the app. Advertising can be viewed offline too.

And if publishers don’t just want to make money from advertising, they can also charge a monthly subscription fee using Andrenalin.

The new iPad app-maker is built on top of Mediaspectrum’s existing editorial and advertising tools for newspapers, and it could be customized for other tablets too. Cody said the opportunity for media organizations on these devices could be bigger than the Web, because the advertising is so much more engaging and users spend so much more time in the apps. For example, The New York Times has reported a 15 percent clickthrough rate on ads in its iPad app, compared to 0.01 percent on its website.

“Even if you cut that in half, that’s still massively larger than what’s happening online,” Cody said.

Mediaspectrum plans to make money from Adrenalin by taking a cut of the advertising revenue, though it might offer the service for free to some publishers. The self-funded company is aiming to sign up traditional print publishers and the top tier of blogs, Cody said.