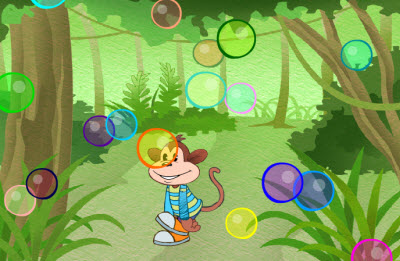 NetToons is one of 65 companies chosen by VentureBeat to launch at the DEMO Spring 2010 event taking place this week. These companies do pay a fee to present, but our coverage of them remains objective.

NetToons is launching a real-time animation platform today that lets just about anyone create their own animation to share with friends on the web.

At the DEMO conference today in Palm Desert, Calif., San Francisco-based NetToons is showcasing an animation platform that lets users create and share branded animations, dubbed ToonCasts. For instance, you can create an animation about your favorite cartoon character using a full set of brand-approved components, such as characters, props and backgrounds.

The platform lets you create animation defined by the participating brands, including existing cartoon characters. You can’t drag your own content into the animation, so it’s a safe space for brands because users can’t create anything that might tarnish their good names. In this sense, NetToons is different from animation sites such as Aniboom, where anyone can upload animations built with any tools. 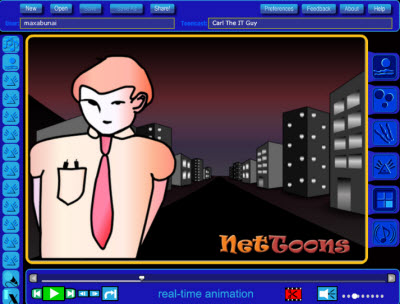 With NetToons, the tools are simple enough so that no animation experience is necessary to use the tools. You register for an account, then you select a backdrop, and populate it with animated characters. Then you can add props and other pieces, and figure out what you want to have happen in the animation. Add your own music, sounds, and dialogue. You can select actions that your characters can perform. The results will look like you created an animation from scratch, said Jim Myrick, chief executive, in an interview.

One of the company’s partners is Future US, a web and magazine publisher that specializes in niche industries, such as video games. NetToons is releasing its first two cartoon properties through an unannounced distributor. The first features pop icon Emily the Strange, a goth character who has millions of fans already. The fans can create their own animations of Emily — selecting from thousands of pieces of Emily art and animated actions. They can set the animation to rock and goth soundtracks, and share them with other fans.

Another partner is is ReVerb, a casual music game, allowing users to create and share animated music videos. Both titles will feature add-on content that users can buy. The creations can result in ad and marketing opportunities for the partners’ syndication sites where the Tooncasts are shared.

The founders of the company — Myrick and Terry Schussler — had the idea for NetToons for close to a decade. But they founded the company in 2007. They have funded it with their own money and have 12 employees.

“We are demonstrating that those people who want to be the next Steven Spielberg can use this as a very powerful tool,” Hensley said. Check out the video interview below with Myrick.