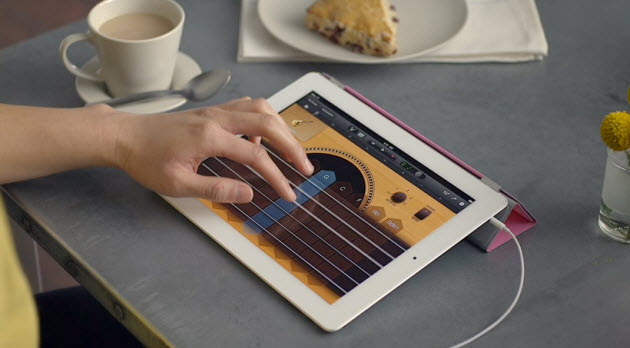 As consumers buy their iPad 2 tablets this weekend, they’re  going to try out a lot of new applications. And one of the coolest new apps they can play is an old stalwart on the Mac: GarageBand. 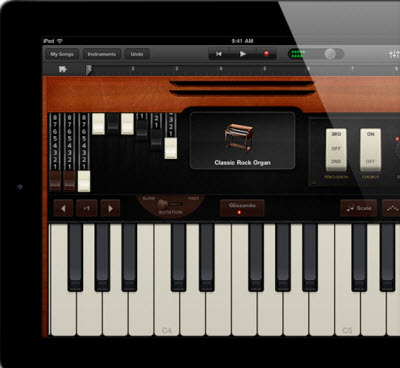 GarageBand is one of the killer apps for the iPad 2 (and the original iPad) that could keep the demand for Apple’s tablet strong even in the face of new competition from Android devices.

While making music on the Mac is fun, GarageBand for the iPad adds a new dimension with the touchscreen and accelerometer, which measures not only where you touch the screen but also how hard you tap it. As you tap the screen, you can tap harder for louder sounds or softer for quieter sounds.

As you can see in the video below by Xander Soren, director of music marketing at Apple, you can play realistic “touch instruments” or “smart instruments” for beginners. When you open the app, you see the “instrument browser” with pictures of the different instruments you can play. If you tap on one, it comes up and occupies the whole screen. You can touch the keys of the grand piano to make piano music. You can play organs, electric pianos, or electronic keyboards known as clavinets. 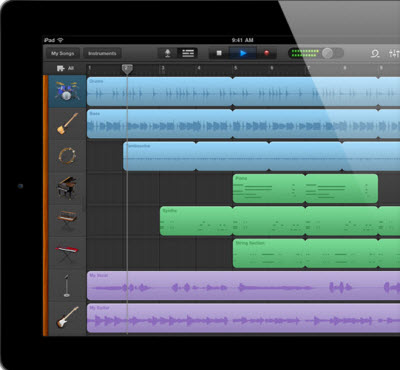 You can even get the effect of holding down a key by tapping the equivalent of a “sustain pedal.” The sound lasts much longer than if you just tap the screen once. You can change the octaves of the piano to get different sounds. The rock organ has draw bars that let you alter the tone of the music as you play it.

The virtual drum kit lets you bash hard or soft, with the accelerometer sensing just how hard you tap the screen. You can run your finger in a circle around the screen, hitting cymbals or drums to make a lot of noise. The smart instruments such as the smart guitar, keyboard, base and drums, are set up so that beginners can learn how to play them. You can lay your hand across all of the strings to dampen the sound. An auto-play feature lets you repeat guitar strums and then use your hands to change the keys, allowing you to make great sounds with very little effort.

“Our camp fires will never be the same,” Soren said. “These smart instruments are like musical training wheels. You can’t play a bad note.”

You can also compose and record your own songs as if your iPad 2 were a music recording studio. If you hit the tracks button, you can bring up a bunch of musical instruments playing sequences. Each instrument can be isolated into a separate track. You can change the intensity of the track, shorten it or otherwise manipulate it. Then you can add as many as eight different tracks to a song and let them all play at once. Soren pointed out that the Beatles could only record four different tracks when they made Sgt. Pepper’s Lonely Hearts Club Band in 1967. You can alter the timing and move the tracks around with your fingers. You can change the volume of instruments and adjust the sound coming out of different speakers. Then you can put it all together as your own original song.

GarageBand for the iPad costs $4.99 in the Apple App Store. Checkout our iMovie story here.