Ten million Americans take more than five medications daily, and startup OMyMeds wants to help them use technology, instead of sticky notes or reminders from family, to manage their medication times.

Founded this year, OMyMeds has raised $100,000 and is composed of three founders: Dr. Eugene Spiritus, who has served for the last 12 years as Chief Medical Officer for UCI Medical Center; Dr. Dan Ross who also manages a consulting firm for hospital and health system safety and operations; and Onne Ganel who leads the medical device practice at Locust Walk Partners, a life sciences focused sales-side investment banking firm.

“We are the only company that does not require people to manually enter their medications and then manually update them on a constant basis,” says Ganel in a VentureBeat interview. The platform reads the medication data directly from a patient’s insurance company record or pharmacy record.

Based in Orange County, Calif., OMyMeds started out when Spiritus became frustrated with the medication management of his ailing mother. She had heart failure, diabetes and emphysema and took 12 different medications daily, with three to four additional drugs on an as-needed basis. He displayed a medicine cabinet on stage, full of her medications with little sticky notes reminder her when to take them. 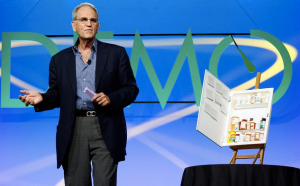 “She tried to manage this complicated regimen with sticky notes, hand written lists and pillboxes,” says Spiritus. “She had a vague idea about each medication, but invariably she’d forget to take her meds or, worse, she would take the same medicine twice. She had many physicians, including a cardiologist, pulmonologist, endocrinologist and internist. At various times, my sisters, wife and several home health aides were also involved with her care. Sadly, no one was ever 100% sure exactly what she was taking.”

Spiritus came up with the idea of designing a calendar and info medication card that would help others manage medication with minimal manual updating.

Competitors include Vaica USA, Medminder, MedActionPlan and Healthonemed (Pillphone, Pillboxer and Pilltaker). OMyMeds differentiates itself by marketing the platform directly to insurance companies and pharmacies, not consumers. The platform will convert the medication lists in the individual databases of enrollees into a set of user friendly tools such as a daily schedule for medications with images and a “cheat sheet” with pertinent information.

OMyMeds is one of 80 companies chosen by VentureBeat to launch at the DEMO Fall 2011 event taking place this week in Silicon Valley. After our selection, the companies pay a fee to present. Our coverage of them remains objective.